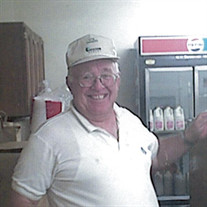 A Funeral Service for Hubert will be held on Tuesday, May 28, 2019, at 2:00 p.m., at the United Methodist Church in Geneva, Nebraska with Kim Dunker presiding. Visitation will be held on Monday, May 27, 2019, from 5:00 p.m until 8:00 p.m. with the family present from 5:00 p.m. until 7:00 p.m. at Farmer & Son Funeral Home in Geneva, Nebraska. Military Graveside Services will be conducted at the Geneva Public Cemetery following the funeral service. In Lieu of Flowers - Memorials are to be directed to Geneva Rescue. Hubert Dale Johnson was born to Evelyn Mae Whittaker and Ross Hubert Johnson on October 22, 1931 in Sutton, Nebraska. And passed away on May 23, 2019 at Fairview Manor, Fairmont, Nebraska at the age of 87 years, 7 months and 1 day. With Frances at his side with him holding her hand. Hubert grew up in Hastings, Nebraska and went to Hastings High School. While in High School he would feed horses and clean the horse stables before going to school in the morning and then he worked at Jack and Jill grocery store after school and on weekends. Hastings High is where he met the love of his life Frances Elizabeth Jones. He married Frances December 31, 1950. This past December they celebrated their 68th Wedding Anniversary. They were married one year when he got called to serve his country. He left in 1952 to serve his country in the United States and had many stories to tell of his time while stationed in Alaska. He was discharged from the Army in 1954, after returning home he worked at the Ammunition Depot east of Hastings. In 1956 they moved to a farm southeast of Fairmont. Shortly after they moved to a small house northwest of Geneva. Just down the road from where his father lived. Then in 1959 they moved to the Pangle farm which they made their home until 1977. This is when he found the love of the land. Not only farming but raising milk cows, chickens, breeding cows/baby calves, breeding sows and raising piglets to market hogs and to breeding sheep and raising baby lambs. He did it all. This is where he gave the love of animals to the kids. To this union they had three children Michael Jay born 1952, Constance Louise 1955 and Donna Joy 1960. In 1976 he started building their own home in Geneva. He did this starting from drawing his own blue prints to the 2x4s, dry wall, wiring, plumbing, roofing and then finally bricking of the house. With family and friends helping him with various jobs. All this was done by him reading his how to books after hours of farming and raising animals. After moving to town he continued to farm. And although not farming the Pangle farm anymore he had acquired other farm ground to keep him busy along with working for Schelkopf hog farms as a maintenance man. Which included many projects. After 32 years he then decided to stop farming and started working at Nick’s Farm Store as mechanic, setting up equipment and driving the semi to haul equipment. He then decided to retire but just had to find something to do so he started working for Richard Kleinschmidt helping with field work and helping with harvest driving the semi. Eventually he had to fully retire. Many days and evenings were spent playing cards, loving “5” point pitch and pinochle and reluctantly playing dominoes. Hubert also known as “Hubie” to many friends. He was involved in many things throughout his years of life, including being president of Farm Bureau, I.O.O.F Lodge, Square Dancing, Bowling Leagues-bringing home many trophies. Along with a score of 300 and many more scores close to that. He was involved in 4-H as the kids were involved. He was a member of the United Methodist Church. After Hubert started having strokes it took his mind a little each time. After being at Exeter Care Center and then Heritage for a short time, he finally found home to be Fairview Manor of Fairmont – He loved all the women doting on him. A once in a lifetime experience came when he got to fly in the plane of Ageless Aviation Dreams Foundation. Hubert is preceded in death by his parents Evelyn Whittaker Johnson, Ross and Sylvia Johnson (step mother). Parents in law Albert and Grace Springer, half-brother William Overton and son in law Kenneth Woodward. Hubert is survived by his wife of 68 years Frances of Fairmont, Son Michael and Louise Johnson of Lincoln, daughters Connie Woodward of Fairmont and Donna and Dennis Oliva of Milligan. Grandchildren: Matthew Johnson, Hebron, Kenneth Woodward (Karla) of Clarksville Indiana, Elizabeth Jasperson (Keith) Omaha, Grace Woodward and friend Matt. Hastings, Lindsey Stone (Shane) of Hastings, Colten Oliva (Bobbi) and Nathan Oliva both of Milligan. Step grandsons Kyle Bucknell (Jennifer) and Barry Bucknell (Cheyanne) both of Lincoln. And 17 ½ great grandchildren. Two half-brothers Donnie Overton of Colorado and Lowell Johnson of Geneva and step sister Linda (Lou) Schafer of Tobias.

The family of Hubert Dale Johnson created this Life Tributes page to make it easy to share your memories.

A Funeral Service for Hubert will be held on Tuesday, May 28,...