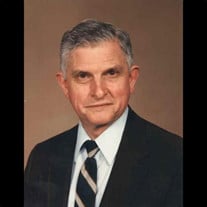 Hugh Francis Wilkins was the eldest son of Earl H. and Grace W. Wilkins. He was born at their home in Geneva, Nebraska June 25, 1921. He left us the day of his 99th birthday, June 25, 2020. He was one of four children in the family. He met his wife Barbara A. Noyes (deceased) in New York City, New York in 1946 while attending the Riverside Guild young persons group at Riverside Church. He showed up at Barb’s workplace the day after they met and in his typically bold way asked her out for lunch. Although she was slightly taken aback by his approach, they were married at Riverside Church June 7, 1947. In 1948, after the birth of their son Cam, they moved back to Nebraska, settling in Geneva. Hugh and Barbara were the parents of five children, Hugh C. (Cam) (deceased), Susan E., Beth M., Alice F., (deceased) and Katherine G. Wilkins. Hugh attended Geneva Public School, graduating in 1938. He was a member of the National Honor Society and excelled in debate. He attended University of Nebraska, Lincoln, graduating with honors in 1942. He was a member of ROTC, Delta Upsilon fraternity, the Innocents Society and Phi Beta Kappa. Harvard Business School accepted him in 1943 where he studied Industrial Administration and continued in ROTC. His education was interrupted by World War II. Hugh served as a 2nd Lieutenant with the 3810 Quartermaster Corps Truck Company. Service locations included Wales, France, Belgium and Germany. After leaving the army, he returned to Harvard Business School receiving his MBA in 1948. Hugh was curious about everything and never stopped asking questions. He played the piano and spoke French (badly). He couldn’t hold a note but loved to dance in college and attended USO dances. Vegetable gardens were always a summer project from childhood on. His favorite book was the New Testament and he studied the bible and other religions his entire life. Hugh and his brothers were encouraged by their father to become Boy Scouts. As an adult he continued that tradition and became a troop leader in Geneva. Many young men, including his son Cam, became Eagle Scouts under his guidance. He was extremely proud of all of them. He encouraged Barb’s participation in Girl Scouts and his daughters were in local troops. Hugh also took care of horses, occasional cows, sheep, a goat, a gaggle of geese and multiple dogs. He loved to camp out and occasionally led fishing expeditions to the back pond. Although he couldn’t swim well, he was the one who always tested the ice in the pond before skating parties. Rides in the country were frequent and much enjoyed despite all the kids hanging out the rear windows of the car. Hugh was a deacon at the Congregational Church in Geneva and remembered sitting in the back row of the balcony in 1926 at the dedication of the new brick building. He was a member of the church for over 80 years and influenced many 7th and 8th graders in his sometimes non-traditional Sunday School classes. One of the ways he exhibited his unending faith in the goodness of people, was to encourage positive growth with the girls at YRTC, sharing bibles and meals with many. He had a huge and giving heart. Hugh was a founding member of the local Rotary Club, participated in the PTA and the Chamber of Commerce. The Fillmore County Foundation and the Fillmore County Development Corporation owe their origins to Hugh. He was in many banking, business and church associations too numerous to mention here. He is survived by his brothers William W. (Nancy) and Robert E Wilkins (Gladys, deceased) and his sister Beth M. Wilkins; children Susan E., Beth M., and Katherine G. (George Pond), daughter-in-law Pam Wilkins and grandchildren, Nate W. Wilkins, Cavan W. (Samantha) and Emlyn G. Short, David M. and Hugh R. Pond as well as nieces and nephews and numerous cousins. A Celebration Of Life Service for the public will be held at a later date and a more complete obituary will follow. A private family Funeral Service for Hugh was held on Tuesday, June 30, 2020 at 10:30 a.m. at the 1st Congregational United Church Of Christ in Geneva with Pastor Stuart Davis officiating. Karen Kohler played instrumental versions of "God Of Grace & God Of Glory" and "In The Midst Of New Dimensions." A recorded selection of Benny Goodman's "Memories Of You" was played as the recessional song. Pallbearers for the service included Cavan Short, Nate Wilkins, John Wilkins, Frank Heinisch, Kent Myers, and Kurt Myers. Honorary Bearers included David Pond, Hugh Pond, Emlyn Short, Robert Wilkins, William Wilkins and Beth Wilkins I. A private family Graveside Service with Military Honors was held in the Geneva Public Cemetery following the Memorial Service. Memorials are suggested to Fillmore County Ministerial Association or the Fillmore County Foundation.

Hugh Francis Wilkins was the eldest son of Earl H. and Grace W. Wilkins. He was born at their home in Geneva, Nebraska June 25, 1921. He left us the day of his 99th birthday, June 25, 2020. He was one of four children in the family. He... View Obituary & Service Information

The family of Hugh F. Wilkins created this Life Tributes page to make it easy to share your memories.

Hugh Francis Wilkins was the eldest son of Earl H. and Grace...