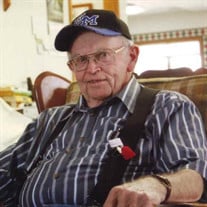 A Graveside Memorial Service for Spud will be held on Saturday, February 19, 2022 at 11:00 a.m. at the Exeter Cemetery in Exeter, Nebraska. Pastor Murry Johnston will preside over the Service. Military Honors will be performed by the Exeter American Legion William Sullivan Post #218. Memorials are suggested to the Exeter Library or the Exeter American Legion Post 218. Hugh Aubrey Wilson was born to Hugh Wilson and Anna (Underwood) Wilson on January 3, 1929, at Exeter, Nebraska. He passed away on Saturday, February 12, 2022 at Ridgewood Care Center in Seward, Nebraska at the age of 93 years, 1 month, and 9 days. He was one of 4 children born in the family. When Hugh was 6 years old, his family moved to a farm about five miles north and west of Exeter. He attended country school until the 8th grade, walking to and from school with his siblings unless the snow was too deep. Hugh graduated from Exeter High School in 1946. On August 22, 1951, Hugh was inducted into the Army and served in the Korean War before being honorably discharged on May 5, 1953. After his service in the Army, Hugh returned home and continued his education enrolling at Southeast Community College in Milford and studying Carpentry. He worked 10 years in construction and then farmed until retirement in 2001. He also worked a variety of part time jobs in addition to farming. Hugh was an avid reader. It was noted by the Exeter Librarian that there were very few books in the library that had not been checked out to Hugh Wilson. He especially enjoyed books of history and autobiographies. As a child and young adult, he loved to draw and do pencil sketches, and his family has kept much of his art work. Hugh also enjoyed the outdoors, nature, playing cards, and spending time with family and friends. He was affectionately known as “Spud” by all of those close to him. He was given that nickname after going to Western Nebraska in the 1940’s to harvest potatoes for extra money. He was a member of the United Methodist Church and the Exeter American Legion. He will be remembered for his quiet, unassuming manner and gentle ways. He was a man of few words, but when he spoke, a person wanted to listen. Hugh was preceded in death by his parents Hugh & Anna; brother & sister-in-law John & Carol Wilson; and brothers-in-law Dale Hall and Glen Plettner. He is survived by his sisters Ann Hall of Seward, Nebraska and Alice Plettner of Columbus, Nebraska; and many nieces and nephews. He will be missed by many.

A Graveside Memorial Service for Spud will be held on Saturday, February 19, 2022 at 11:00 a.m. at the Exeter Cemetery in Exeter, Nebraska. Pastor Murry Johnston will preside over the Service. Military Honors will be performed by the Exeter... View Obituary & Service Information

The family of Hugh A. "Spud" Wilson created this Life Tributes page to make it easy to share your memories.

A Graveside Memorial Service for Spud will be held on Saturday,...

Send flowers to the Wilson family.