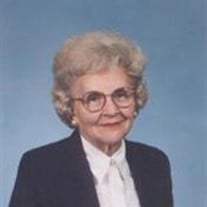 Iola Lavonne (Leimbach) Weiss was born on September 23, 1917, at the family home near Bruning, NE, to Herman Henry Leimbach and Frieda Anna Maria (Otte) Leimbach. Iola had two older sisters, Edith (Jewell), and Arlene (Braun), and one younger brother, Kenneth. On March 17, 1932, Iola was confirmed at the Trinity Evangelical Lutheran Church in Bruning, NE. Iola attended country school – District 82, Fillmore County. She proudly represented her school and county as a spelling contest winner at the district level and as a participant in the state contest held in Omaha. She attended Bruning High School for two years and then attended Geneva High School, where she graduated with the class of 1935. Following graduation she clerked in Harry Crawford’s and Dick Smith’s grocery stores. Bernard Earl Weiss, a local farmer and a Hested’s clerk, called her for a date. She said it was “love at first sight” and after going steady for three years, they were married on September 1, 1940, at the rural Bruning home of Iola’s parents. Bernard and Iola lived on a farm in eastern Chelsea township, Fillmore County, for six years. Then they moved to their newly acquired farm two miles south of Geneva, where they lived until 1968 when they moved into Geneva and retired in 1970. Three children blessed their home: Suzanne (Shaw), James, and JoAnn (Trumper). Iola often said she and Bernard felt their greatest accomplishment was sending their children through college. All three attended UN-L; both daughters became teachers and Jim became a veterinarian. From 1959 (the year Suzanne started the University) until Bernard’s declining health, they faithfully attended Husker home football games, even traveling to Hawaii for one! Iola and Bernard were faithful Christians and loyal members of the Geneva United Methodist Church. Iola was active in the women’s organization and served in many ways, including the presidency. She was a charter member and president of the Fillmore County Hospital Auxiliary. She was also a member of the Geneva Chapter #180 of Eastern Star. Iola was an excellent bridge player and belonged to several bridge clubs. She also enjoyed playing golf. Following retirement, Bernard and Iola enjoyed some traveling, especially their trips to Hawaii, Niagara Falls, and Nova Scotia. Sue, Jim and Jo will always treasure the memories of their family trips to Colorado, Wyoming and Washington State. The Weisses greatly enjoyed family get-togethers. They loved hosting extended family gatherings, especially at holiday time. All the grandchildren loved to spend time in their home and have special memories of their grandma’s potato salad, raspberry salad, her raspberry swirl dessert, the best cherry pie in the world, her pumpkin cookies, fruitcake and other goodies. Playing cards was always a part of family gatherings. Bernard passed away on December 6, 1988. Iola continued to live in their Geneva home until June 17, 2008, when she moved to Heritage Crossings, where she passed away on December 9, 2011, at the age of 94 years, two months, 16 days. She is survived by her children and their spouses: Suzanne and Jim Shaw of Geneva; Dr. Jim and Carol Weiss of Elkhorn; and JoAnn and Roger Trumper of Geneva; grandchildren: Deb (Dave) Nitz, Steve (Steph) Weiss, Andy (Lori) Weiss, Mike (and special friend Lana) Shaw, Martha (Johnny) Hyde, Kerry (Brad) Conner, Marcy (Thomas) Woods, and Lori (Jason) Voss; 21 great-grandchildren and nieces and nephews. Preceding her in death were her husband, her parents, her three siblings, and one granddaughter. Funeral services for Iola will be Monday at 10:00 a.m. at the United Methodist Church in Geneva, Nebraska. Interment will be in the Geneva Public Cemetery. Visitation will begin Sunday at 1:00 until 8:00 at the Farmer & Son Funeral Home in Geneva. Memorials are directed to the United Methodist Women or the Geneva Senior Center.

The family of Iola L. Weiss created this Life Tributes page to make it easy to share your memories.

Send flowers to the Weiss family.