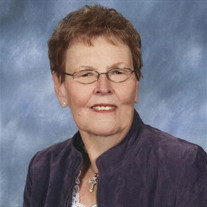 Irene Lucille Bartels of Geneva, Nebraska celebrated her eternal life in Christ when she died at the age of 80 on Saturday, February 28, 2015 at Southlake Village in Lincoln. Irene was born September 19, 1934 in Breman, Kansas to Frederick and Clara (Meyer) Wasserman. She was baptized on September 30, 1934 at Emmanuel Lutheran Church in Breman Kansas and confirmed on April 10, 1949 at Our Savior Lutheran in Odell, NE. Irene married Frederick Bartels September 4, 1966 at St. Paul Lutheran Church in Beatrice Nebraska and moved to his dairy farm near Tobias where she worked beside him and together they raised three daughters. Frederick and Irene were active members of Zion Lutheran Church in Tobias NE. where they served in many capacities. Irene was a woman a confident, deep, and sustaining faith in the grace of Jesus Christ. She was a delightful mother and grandmother who took great joy in her family. Irene loved to serve and care for others and for years did so as she drove school bus for Meridian Public schools and later worked as a nurse’s aid and activities director at the Filmore County Hospital. She blessed many with her talent as a seamstress and enjoyed giving to her community and through her leadership in TOPS, her service in the American Legion Auxiliary and the church. Irene is preceded in death by parents Clara and Frederick Wasserman and Husband Frederick Bartels. She is survived by three daughters: Jana Bartels of Grand Island, NE., Lynette (Steve) Kohtz of West Des Moines, IA., Carol Bartels of Cypress, TX., grandsons Noah and Levi Kohtz, Brothers Melvin (Verna) Wasserman of Lincoln, NE., Eldon (Lavon) Wasserman of Plymouth, NE., Leonard (Delores) Wasserman of Lincoln, NE., sisters-in-law Lois Schoenbeck of Fairbury, Ne., and Lucinda Beckman of Lincoln, NE., and numerous nieces and nephews. Public visitation will be held only Monday, March 2 from 1:00PM-8:00PM at the Farmer and Son’s Funeral home in Geneva. Family will be greeting friends from 6:00PM-8:00PM. Graveside committal service will be at 1:30 PM at the Tobias Cemetery followed a celebration of life at Zion Lutheran Church at 2:30 PM. Memorials to the family for later designation.

Irene Lucille Bartels of Geneva, Nebraska celebrated her eternal life in Christ when she died at the age of 80 on Saturday, February 28, 2015 at Southlake Village in Lincoln. Irene was born September 19, 1934 in Breman, Kansas to Frederick... View Obituary & Service Information

The family of Irene L. Bartels created this Life Tributes page to make it easy to share your memories.