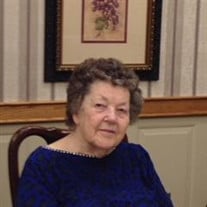 A Memorial Service will be held for Irene on Monday, October 9, 2017 at 11:00 a.m. at the United Methodist Church in Geneva, Nebraska with Pastor Michelle Gowin and Kim Dunker officiating. No Visitation as Irene's wishes were to be cremated. Private Family Burial of Ashes will be held at the Geneva Public Cemetery. Memorials are to be directed to the family for a later designation. Irene Betka was born in Chicago, Illinois on December 9, 1923 to Wilmar and Mary (Vandersypt) Wiedow. She was an only child and had the love of her parents in her formative years. In 1938 her father died and left a big void. Irene graduated from high school in 1941 and she and her mother moved into an apartment. She started working for the Illinois Telephone Company, which was located in the loop. In 1942 Irene and her mother moved in with her Aunt Mabelle and Uncle Henry. Three weeks after starting her new job Irene went to a Rural Youth Dance in Woodstock with her cousins. She met the love of her life, Bob Betka, from Fairmont, Nebraska. He was living in Illinois and working on a dairy farm. Bob and Irene were married March 25, 1944 and moved to a farm near Geneva, Nebraska that November. Their daughter, Phyllis, was born in August 1945 just the day before World War II ended. Three more daughters and a son were born in the next 5 years: Sandra, Lorie, Sally and Bob Jr. Irene really enjoyed raising her children and often said it was like having little sisters and a brother. Irene was always baking, sewing and doing laundry for her kids and she was never afraid to take on new jobs like raising a garden, raising and butchering chickens, wallpapering and even upholstering. On November 22, 1947 Irene’s mother married Guy Horner, giving her a stepfather and her children a grandpa. The whole family loved and admired Guy (Grandpa Horner). As the family grew up there were more and more horses on the farm and the girls in particular loved riding, so the Fillmore County Saddle Club was a huge part of their lives. Bob and Irene took the whole family and horses for each to ride in events to all the horse shows in the area. It was always an all-day affair with baskets of food (usually fried chicken) to eat for dinner. The kids grew up and married, bringing 7 grandsons and 2 granddaughters to the family. Now there are 22 great grandchildren and 3 great-great granddaughters. The farm was a great place for the grandkids to come and visit Bob and Irene for a week or so at a time during the summer. Irene loved having them there and baking cookies for them. Bob and Irene started bowling and had many great times with friends at the bowling alley. Irene belonged to a quilting group where many of her friends gathered regularly to quilt, embroider and crochet. Many good times were had with Irene’s sewing friends, her bowling buddies and her friends from the South Madison Club. Irene belonged to many local clubs including: Methodist Circle, a textile painting club, the extension club, Saddle Club, quilting club, Mother’s Club, and was involved in helping with 4-H. In 1992 Bob and Irene bought a home in Geneva and continued their happy lifestyle there. They spent many winters in Arizona and a couple winters in Texas where they met even more wonderful friends. Irene is preceded in death by her husband Bob in 2003, her step-father and mother Guy and Mary Horner, father Wilmar Wiedow, in-laws Bob and Mollie Betka, Aunt Maybelle and Uncle Henry Faerber, son-in-law Kent Hall, niece Lana Miles, brother-in-law Linus Betka, and brother-in-law and sister-in-law Charles and Eleanor Miles, and many friends. Survivors include daughters Phyllis Hall, Sandra (Darryl) Amen, Lorie (Dennis) Kraus, Sally Coppedge (friend Don Yeltin), and son Bob (Kay) Betka, sister-in-law Emily Betka, Grandchildren Kevin Hall, Paul Linder, Andrew Kraus, Mark Linder, Matthew Linder, David Kraus, Julie Linder, Brent Kraus and Jessica Hart, nieces and nephews and many great nieces and nephews. The most important thing our Mom and Dad gave us was their love. From that love we learned all the values we hold dear today: love of our families and friends, honesty, respect for others, love of our country and so much more. They made us strong, caring compassionate adults. We learned all of this from how they loved each other and how they loved us. They loved us so much that they struggled and sacrificed for our well-being How can we ever repay them? By passing on to those we love their beliefs and commitment.

A Memorial Service will be held for Irene on Monday, October 9, 2017 at 11:00 a.m. at the United Methodist Church in Geneva, Nebraska with Pastor Michelle Gowin and Kim Dunker officiating. No Visitation as Irene's wishes were to be cremated. Private... View Obituary & Service Information

The family of Irene Elaine Betka created this Life Tributes page to make it easy to share your memories.

A Memorial Service will be held for Irene on Monday, October...

Send flowers to the Betka family.