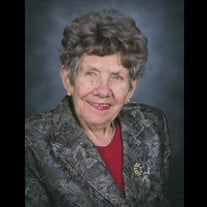 Irene Marie Cook was born to Henry F. and Marie W. (Seeman) Bangert on February 27, 1928 on a farm 5 ½ miles southwest of Lawrence, Nebraska. She passed away at Jefferson Community Health Center in Fairbury, Nebraska on June 23, 2017 at the age of 89 years, 3 months, and 27 days. She was the last of 8 children in the family. Irene was granted rebirth in to the family of God through Holy Baptism on March 25, 1928 at Zion Lutheran Church in Lawrence, Nebraska. Irene attended Zion Lutheran Parochial School near Lawrence. She publicly confessed her faith in our Lord Jesus Christ and was confirmed on May 18, 1941. Irene moved off the farm to Harbine, Nebraska with her parents in 1943. She graduated from Diller High School in 1945 with a 3 year teaching certificate. Irene taught parochial school for 2 years. On February 6, 1948, Irene married Reynold Jurgens at the Zion Lutheran Church in Harbine, Nebraska. This union brought 3 children: Robert, Myrna, and James. The marriage failed after 10 years. On May 29, 1960, Irene was married to Weldon Cook at the Zion Lutheran Church in Harbine. Weldon also had one son, Carey Cook. Weldon then adopted her three children. The couple and 4 children lived in Lincoln where Weldon worked for Fairmont Foods for 28 years. On July 21, 1979, the Cooks moved to Tobias, Nebraska where they purchased the Café & Bar and ran it for 13 years before retiring in September 1992. Irene was active in Ladies Aid, LWML, and led Bible Study in DORCAS Circle for several years. She was also a member of the Tobias Community Club and Legion Auxiliary. Irene was preceded in death by her parents; husband Weldon; her son Robert; a sister and brother who died in infancy; brothers Victor Bangert, Henry Bangert, Jr., Arthur Bangert, Raymond Bangert; and sister Esther Grabowski. She is survived by her daughter Myrna and Brian Murphy of Cave Creek, Arizona; son Jim Cook and special friend Liz of Orting, Washington; step-son Carey Cook; 7 grandchildren and 7 great grandchildren. A funeral service for Irene was held on Wednesday, June 28, 2017 at 10:30 a.m. at Zion Lutheran Church, rural Tobias. Pastor Ryan Meyer officiated the service. Janile Campbell accompanied the congregation in the singing “Abide With Me” and “Rock Of Ages.” Pallbearers for the service included Jim Cook, Brian Murphy, Chris Palmquist, Lyle Bartels, Jon Bartels, and Glenn Kronhofman. Interment was held in the Lincoln Memorial Park Cemetery, Lincoln, Nebraska. Farmer & Son Funeral Home of Geneva conducted the services. Memorials are suggested to the Tobias Rescue Squad. Online condolences may be left at www.farmerandsonfuneralhome.com.

Irene Marie Cook was born to Henry F. and Marie W. (Seeman) Bangert on February 27, 1928 on a farm 5 ½ miles southwest of Lawrence, Nebraska. She passed away at Jefferson Community Health Center in Fairbury, Nebraska on June 23, 2017 at the... View Obituary & Service Information

The family of Irene M. Cook created this Life Tributes page to make it easy to share your memories.

Send flowers to the Cook family.