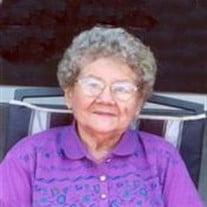 Funeral services for Irene will be held on Friday, July 13, 2012 at 2:00 p.m. at the United Church Of Christ in Belvidere, NE, with Pastor Eldon & MaryBeth Nicholson officiating. Visitation will begin on Thursday from 1:00 p.m. to 8:00 p.m. at the Farmer & Son Funeral Home in Geneva. Memorials are directed to the United Church Of Christ in Belvidere. Irene was born in Ohiowa, Nebraska on March 11, 1921 to Frank & Mary (Dloughy) Bedlan. She died July 11, 2012 in Hebron, Nebraska at the age of 91 years and 4 months. She was baptized in Milligan at the St. Wenceslaus Catholic Church. The family moved to Thayer County when Irene was a small girl. She attended country school and attended one year at Bruning High School before moving to Lincoln to become a maid. Irene had 3 younger siblings. Irene married Bill Hines in 1945 and they were married for 19 years before divorcing. She married Lowell “Babe” West in 1964. The couple spent most of their married life on the farm near Belvidere. She enjoyed agriculture, gardening, planting and harvesting the crops. Driving the truck to town to take corn to the elevator gave her so much enjoyment. She also enjoyed the cattle and hogs, especially the baby calves out in the pasture. Irene and Babe did a lot of traveling, mostly by car, to visit family and friends. In the early fall they would go to Colorado to pick peaches. She enjoyed family reunions and her nieces and nephews. Irene has been a long time member of the United Church of Christ in Belvidere. She belonged to the Ladies’ Aid and the HOA club. She also was a long time seamstress and made her own clothes. She also enjoyed knitting, embroidering and quilting. As her health deteriorated, she no longer was able to enjoy these activities, but she did enjoy reading the daily newspaper, watching TV, and attending the social activities of the nursing home. Irene was always dressed neatly and had her hair fixed every week. Irene was preceded in death by her parents; husband Babe; brothers Frank Duane ‘Bud’ and John Adolph; and by her step-son Max West. She is survived by her sister Ruby Ruth Peppie Hinrichs and husband Bernard; sister-in-law Donna Bedlan; step-daughter Linda Hume and husband Duane; step-grandchildren; step-great grandchildren; nieces, nephews, great nieces & nephews; and other relatives and friends. Services for Irene were held on Friday, July 12, 2012 at 2:00 p.m. at the Belvidere United Church Of Christ with Pastor Eldon & MaryBeth Nicholson officiating. Arlys Dill accompanied the congregation in the singing of “In The Garden” and “How Great Thou Art.” Pallbearers for the service included Gary Peppie, Brad West, Brian Hume, Johnny Bedlan, Vaughn Hinrichs, and Bob Else. Interment was held in the Belvidere Cemetery. Farmer & Son Funeral Home was in charge of the arrangements. Memorials are directed to the Belvidere United Church Of Christ.

Funeral services for Irene will be held on Friday, July 13, 2012 at 2:00 p.m. at the United Church Of Christ in Belvidere, NE, with Pastor Eldon & MaryBeth Nicholson officiating. Visitation will begin on Thursday from 1:00 p.m. to 8:00... View Obituary & Service Information

The family of Irene Marie West created this Life Tributes page to make it easy to share your memories.