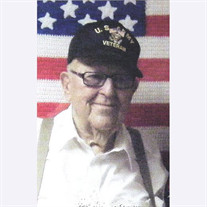 Funeral services for Ivan will be held on Monday, September 15, 2014 at 10:30 a.m. at the St. John's Lutheran Church in Ohiowa. Pastors James & Becky Sells will be officiating the services. Military graveside services will follow the the funeral in the Ohiowa Cemetery. Visitation will be Sunday from 1:00 p.m. to 8:00 p.m., with family present from 4-6 p.m. at the Farmer & Son Funeral Home in Geneva. Memorials in lieu of flowers are directed to the family to be designated at a later date. Ivan Gerald Dunse was born to Louise (Hinrichs) and William Dunse at their family farm Southeast of Ohiowa, Nebraska on June 26, 1924. He passed away at the Fillmore County Hospital in Geneva on September 12, 2014 at the age of 90 years, 2 months, and 16 days. He was baptized at Zion Lutheran Church in Tobias, Nebraska. He was confirmed at South Lutheran Church in Ohiowa, Nebraska. He was a member of St. John’s Lutheran Church in Ohiowa for most of his adult life, serving for a time as a councilman there. Ivan graduated from Ohiowa High School in 1941. He farmed with his Uncle Herman Dunse until he entered the military service on December 22, 1944. He served in the army in Southeast Asia during World War II. Prior to entering the war ,Ivan was proud to have helped build the Bruning Air Base in Bruning, Nebraska. After returning home, Ivan helped to deconstruct it. Upon his return, Ivan resumed farming with his Uncle Herman. Ivan liked custom farming, corn shelling, bailing and silage chopping. Ivan also did a lot of welding for friends. Ivan met Pat Schmale in 1947. They quickly fell in love and were married January 4, 1948, at Trinity Lutheran Church in DeWitt, Nebraska. Unto this union were born three children: Gaylen, Barbara, and Ricky. Gaylen married Barb Krupicka and had two sons, Steve and Matt. Barbara married William Hanson and had two children, Steven and Desiree. Ivan and Pat have 15 great-grandchildren. Ivan was very proud to have had permanent membership in the Legion and V.F.W. in Ohiowa and Geneva, Nebraska. Last Memorial Day, Ivan was honored by the Ohiowa Legion for having served as treasurer for 50 years. Throughout his life, Ivan greatly enjoyed attending the numerous sporting events of his children, his grandsons, and his great-grandchildren. For ten years, Ivan and Pat owned and operated the Ohiowa Bar and Grill, where they sponsored numerous trips to watch the Kansas City Royals and Chiefs’ games. He is preceded in death by his parents and parents-in-law, and his son Ricky. Ivan is survived by his loving wife Pat, his son and daughter-in-law Gaylen and Barb Dunse, his daughter and son-in-law Barbara and Bill Hanson, and his grandchildren and great-grandchildren.

Funeral services for Ivan will be held on Monday, September 15, 2014 at 10:30 a.m. at the St. John's Lutheran Church in Ohiowa. Pastors James & Becky Sells will be officiating the services. Military graveside services will follow the the... View Obituary & Service Information

The family of Ivan G. Dunse created this Life Tributes page to make it easy to share your memories.

Funeral services for Ivan will be held on Monday, September 15,...

Send flowers to the Dunse family.