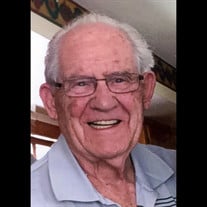 Ivan “Nick” Burdette Nicholson, age 93, passed away on October 26th, 2019 at the Lancaster Rehabilitation Center in Lincoln, Nebraska. Ivan was born to Floyd Gilbert Nicholson and Jessie Viola Larsen in Wilsonville, Nebraska on May 23rd, 1926. Ivan grew up in Beaver City, NE and graduated from High School in 1944. Immediately following graduation he joined the Navy and served for two years during WWII aboard the U.S.S. Hoggatt Bay aircraft carrier in the Pacific. On June 6th, 1948 Ivan married Phyllis June Lowe in Huntley, Nebraska. They raised their two sons, Mark and Steve, in Geneva, Nebraska where Ivan worked as a butcher and meat department manager at Safeway. Ivan was very involved with Geneva Rotary, sung in the Methodist Church choir and taught Sunday school. He also enjoyed playing golf and attending all types of Geneva and University of Nebraska sporting events. Ivan and Phyllis put many miles on the car attending Husker football, basketball, and volleyball games. Phyllis died on January 28th, 1982. In 1987 Ivan was happy to reconnect with Dorothy Mae Caton, a good friend from the past. They married on April 16th, 1988 and moved to Lincoln, Nebraska. While in Lincoln, Ivan worked part time in Leon’s meat market. When not at work they enjoyed playing cards ( “Head & Foot”), feeding the birds and playing with their dog, Mitzi. They also spent many days at their cabin on a lake near Blue Springs, Nebraska. Lake highlights included listening to Ivan sing his favorite songs and play the harmonica, while the family roasted marshmallows around the campfire. When Ivan and Dorothy were not at home or at the cabin they loved to travel. They visited family in Kenya, France, Germany, and Denmark. They also traveled around the United States in their RV to see family and on mission trips. Ivan especially loved recalling stories from one memorable RV trip to the Pacific Northwest with his grandchildren. Ivan was preceded in death by his first wife, Phyllis, sisters Nelda Wheeler from Shreveport, LA, and Bertha Hougnan from Buena Vista, CO, step-brother Robert Williams, and daughter in-law Betty Nicholson, of Oregon. He is survived by his wife Dorothy, brothers Reverend Eldon (Mary Beth) Nicholson of Geneva, and Reverend Floyd (Judy) Nicholson of Allendale, NJ, step-sisters Dixie Knapp of San Diego, and Jennie ( Ron) Martin of Terre Haute, sons Mark ( Debbie) Nicholson of Lincoln, and Steve ( Karyn) Nicholson of Omaha, step-sons Lynn ( Kate) Caton of Orcas Island, WA, Scott ( Eva) Caton of Berlin, Germany, granddaughters Brooke (Ryan) Tefft of Omaha, Kate Nicholson of Omaha, and grandsons Marcus Caton of Portland, and David ( Felix) Caton of Mannheim, Germany. Ivan was able to find the good in almost any situation and was humble enough to give thanks. He also took to heart the advice he received from his parents. His mother advised him to “Remember that you are no better than anyone else and no one else is better than you” and his father stressed “Do what is expected of you, plus a little more.” Through his last days at Lancaster Rehabilitation Center many of the staff expressed their admiration for Ivan’s continued positive attitude and grace. In lieu of flowers donations can be made to the United Methodist Church of Geneva, the Hospice Community Care Nebraska, or a charity of your choice. A Funeral Service for Ivan was held on Saturday, November 2, 2019 at 10:00 a.m. at Farmer & Son Funeral Home in Geneva. Pastor Doug Griger officiated the Funeral Service. Sondra Myers accompanied the congregation in the singing of “Amazing Grace” and “Joyful, Joyful.” Pallbearers were Ivan’s family members. Interment was held in the Geneva Public Cemetery following the Funeral Service with Military Rites performed by the U.S. Navy Military Honor Guard. Farmer & Son Funeral Home was in care of the arrangements and online condolences can be left at www.farmerandsonfuneralhome.com. Memorials are directed to the United Methodist Church in Geneva, the Hospice Community Care of Nebraska, or a charity of your choice.

The family of Ivan B. "Nick" Nicholson created this Life Tributes page to make it easy to share your memories.

Send flowers to the Nicholson family.