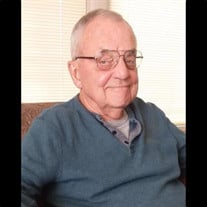 Jack R. Harris was born in Connersville, Indiana on April 11, 1937. He was blessed with his wonderful parents Jack and Tillie Harris. He passed from this life on March 24, 2021 at Bryan East Hospital in Lincoln at the age of 83 years, 11 months, and 13 days. Jack attended elementary through high school in Detroit, Michigan. Jack joined the Air Force in 1954. On June 7th, 1958 Jack married (Loris) Kay McQuistian and to this union 5 sons were born; Jeff, Doug, Dave, Steve and Mike. Jack and Kay lived in many states including Nebraska, Michigan, Ohio, Missouri, and Alabama before settling and raising their family in York County and then moving to Fairmont, Nebraska. Proudly serving his Country, Jack served 10 years in the United States Air Force and 15 years in the Army National Guard rising to the rank of First Sergeant. Jack worked in various fields throughout his life including construction, warehouse, sales, typewriter repairman and many others. His sons recount that their father modeled a work ethic that they continue to emulate through their lives. Jack was a man who valued promptness, neatness, honesty, and a true respect of others in any work environment as well as life in general. As anyone who knew Jack can relate, he truly enjoyed landscaping and yard work as evidenced by his perfectly maintained properties in Fairmont. In his younger years, Jack enjoyed fishing, horseback riding, baseball, hockey and, from all accounts, his accordion playing days in a band. The most recent passion for Jack is the American Freedom Defenders Veterans Memorial in Fairmont. This project was the brainstorm of Jack and Kay and his determination has made this dream and vision of his come to life. Jack truly was a person of very high values and held high expectations of himself and others. He was the ultimate protector of those he loved and cared about. Jack would “tell it like it is” but yet, one knew he’d always have your back. If Jack loved you, you knew it. He was a stern but loving man. He was ‘bullheaded’, yet loyal; short tempered, but giving and caring. Jack was never afraid to speak his mind, but always with the best of intentions for a positive result. Jack respected a person who was accountable to their word. Those who knew Jack well understood that under his seemingly hard exterior was a kind, loyal, and loving heart. Preceding Jack in death were his parents, Jack and Tillie Harris. Those who remain to remember him are his loving wife of 62 years, Kay, for whom his world revolved around; his sons and wives Jeff and Kathy of Firth, NE; Doug and Melinda of Quitman, GA; Dave and Carrie of Topeka, KS; Steve and Barb of York, NE and Mike and Kim of New Ulm, MN. Grandsons include Darrick, Tyler, Jake, Thad, Devin, Todd, Troy, Travis, Connor, Cameron, Andrew and Cory and Granddaughters Amy and Ashley; as well as 12 great-grandchildren with 2 more “on the way” and one brother, Jerry Harris as well as many nieces and nephews. Jack led an honorable life comprised of love of family and friends, service, work, and fierce loyalty to those whose paths he crossed. Jack will be missed greatly by his family, friends and a community of people who loved and respected him. A Memorial Service for Jack was held on Monday, March 29, 2021 at 10:00 a.m. at the American Freedom Defenders Veteran's Memorial Park in Fairmont on the corner of 9th and HWY 6, which he helped establish. Pastor Seungli You officiated the Memorial Service. The recorded selections "You Raise Me Up," "Amazing Grace," and "My Way" were played during the Memorial Service. Honorary Pallbearers for the service included Jack's Grandchildren. A Graveside Service with Military Honors was held at the Fairmont Cemetery following the Memorial Service. Military Honors were performed by the Fairmont American Legion Lt. Earl Forbes Post 21 and the Offutt Honor Guard. Memorials in lieu of flowers are suggested to the American Freedom Defenders Memorial, PO Box 174, Fairmont, Nebraska 68354.

Jack R. Harris was born in Connersville, Indiana on April 11, 1937. He was blessed with his wonderful parents Jack and Tillie Harris. He passed from this life on March 24, 2021 at Bryan East Hospital in Lincoln at the age of 83 years, 11 months,... View Obituary & Service Information

The family of Jack R. Harris created this Life Tributes page to make it easy to share your memories.

Jack R. Harris was born in Connersville, Indiana on April 11,...

Send flowers to the Harris family.