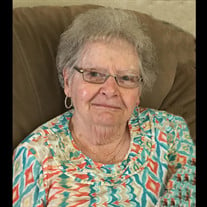 Jacquelyn Ann Niederklein was born to Gustav & Clara (Oelkers) Schilke on October 23, 1933 at Tobias, Nebraska, and passed away on September 30, 2017, in Lincoln, Nebraska at the age of 83 years. She was the only child born to Gustav & Clara. Jackie was baptized at St. John’s Lutheran Church on May 6, 1934 and also confirmed in the same church on April 10, 1949. She was united in marriage to Myron Niederklein of Tobias on May 18, 1952. Four children were born to this union. Jackie grew up on farms in the Daykin, Harbine, and Tobias areas and attended Tobias schools, where she graduated from Tobias in 1951. Following her marriage to Myron in 1952, Jackie and Myron lived in Cheyenne, Wyoming, and Belleville and New Baden, Illinois while Myron was in the Air Force. In 1956, Jackie and Myron moved to the current farm between Tobias and Ohiowa, where they raised their four children. Jackie was a hard working wife, milking the cows, doing the chores, and taking meals to Myron and her sons who worked long hours in the fields. In 1993, Jackie and Myron moved to her present home in Tobias. Jackie enjoyed large family gatherings, whether she was hosting them in her home or taking the family out to eat. She loved playing cards and games with her children, their families, and friends, especially playing pitch. Jackie had a special relationship with all of her grandchildren and great-grandchildren, was extremely proud of them all, and always reached out to everyone on their birthdays. Jackie was an avid Husker fan, enjoying Husker football, baseball, and volleyball. She enjoyed texting with everyone, sending out score updates as the games progressed. She could watch a game on TV, listen to another on her iPad, and read a book. She also continued to follow the Meridian games on the radio through the years. Jackie loved to travel and never turned down an opportunity to go somewhere. Over the years, Jackie managed to visit every state but Alaska and she and Myron went to Europe. She was also involved with the Saline County Rural Transit, Tobias Community Club, St. John’s Lutheran Church, Tobias Red Hats, Tobias Library, and the Election Board. Jackie was known for her extreme detail with everything, such as how much rain, how many acres had been harvested, how many pigs were born, what she had for dinner at the café, who she saw when she went somewhere and what she did there, who her card partner was and how many card games they won. Her texts were quite lengthy and everyone loved that about her. Jackie could also remember how everyone was related and all that information she knew will definitely be missed. Jackie was preceded in death by her parents, Gus & Clara Schilke; husband Myron Niederklein; sisters Naomi Bundy and Melba Mayo; and brothers Rex McAdams, Robert Schilke, and Merlyn Schilke. She is survived by her daughters Kathy Hausen & husband Dale of Columbus, Nebraska and Tonya Wagner & husband Scott Lincoln, Nebraska; sons Galen Niederklein & wife Patsy of Tobias, Nebraska, Kevin Niederklein & wife Terri of Omaha, Nebraska; grandsons Steven Wiersma of Primghar, Iowa, Tyler Niederklein of Omaha, Nebraska, Justin Niederklein of Long Beach, California, and Boston Wagner of Lincoln, Nebraska; granddaughters Kimberly Gassen & husband Jed of Columbus, Nebraska, Tanya Anderson of Beatrice, Nebraska, Toni Niederklein and wife Amber of Omaha, Nebraska; step-grandchildren Rachel Hausen of Sibley, Iowa, Shannon McAlpine of Ashton, Iowa; brother-in-law LeRoy Niederklein & wife Pauline of Tobias, Nebraska; 14 great grandchildren; and nieces and nephews. A Funeral Service for Jackie was held on Thursday, October 5, 2017 at 10:30 a.m. at the St. John’s Lutheran Church in Ohiowa. PMA Jim Germer officiated the service. Nancy Cradduck accompanied the congregation in the singing of “On Eagles’ Wings,” “How Great Thou Art,” and “Amazing Grace.” Pall Bearers for the service included Tyler Niederklein, Justin Niederklein, Boston Wagner, Steven Wiersma, Jed Gassen, Jerry Niederklein, Terry Niederklein, and Bob DeWald. Honorary Bearers were Toni Niederklein, Tanya Anderson, Kimberly Gassen, Rachel Hausen, and Shannon McAlpine. Interment was held in the Ohiowa Public Cemetery following the funeral service. Farmer & Son Funeral Home conducted the services and online condolences may be left at www.farmerandsonfuneralhome.com. Memorials are suggested to the St. John’s Lutheran Church in Ohiowa.

The family of Jacquelyn A. "Jackie" Niederklein created this Life Tributes page to make it easy to share your memories.

Send flowers to the Niederklein family.