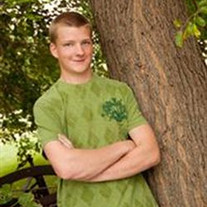 Jake Reed Martin was born to Phillip Reed Martin and Teresa Marie Tatro Martin on April 23, 1993 in Glendale, Arizona and passed away July 2, 2014 at his home in Geneva, Nebraska at the age of 21 years, 2 months and 9 days. Phil, Teresa and Jake moved from Peoria, Arizona to Aurora, Colorado when Jake was 1 ½ years old where they made numerous life long friends. At the age of 5, they moved “home” to Geneva. Through his school career, Jake participated in many sports and activities even being class president two years in a row. He truly loved wrestling, trap shooting and racing ATV’s. Phil and Teresa became a permanent fixture at the gym on meet days, and trap meets in Aurora and Doniphan. Jake did all this while working at Sargent Irrigation after school, weekends and summers. Jake graduated from Fillmore Central High School in 2011. From there he attended Tulsa Welding School in Tulsa, Oklahoma. After finishing top of his class for several phases, he graduated in March 2012 as a Master Welder. Upon returning to Geneva he went to work at Tuttle Inc in Friend. He was quickly brought back into the Sargent team where he worked until May when he decided to work in the family business with Grandpa at Stan’s Recycle & Salvage. In August 2013, Jake got the little sister he never had when his cousin Lindsay Martin moved to Geneva from Arizona. They shared a bond that will never be broken. Racing was a passion that Jake and Phil shared. Many hours were spent tearing bikes down, talking racing strategies and hanging out at the track. Jake was also an avid hunter, enjoying deer hunts with Phil and duck & goose hunts with “the guys”. It wasn’t uncommon to see Jake getting up before dawn to walk to a pond or in a field in the dark, but it was probably the only thing Jake would get up early for. Jake was a loyal friend. He deeply loved the people he was close to. He had a quick wit, dry sarcasm, fierce intelligence and a stubborn streak a mile long. Jake is survived by his parents, Phil & Teresa Martin of Geneva. Grandparents Stan & Connie Tatro of Geneva, Nebraska and James & Emogene Martin of Ajo, Arizona. Aunts and Uncles Jason & Micky Tatro of Geneva, Jeff & Darlene Martin of Peoria, Arizona and Doug & Pam Martin of Buckeye, Arizona, Don Tatro of Winter Park, FL. Cousins Austin, Brock & Carson Tatro, Whittney Ullinger & Maxx, Lindsay Martin, Mysticole Torda & Victoria, Xavier and Kana, Bryan Martin & Matthew and Serenity and Steven Garcia. Special friends Kip & Laura Steuben and family along with a host of extended family and friends. Funeral Services were conducted at 1st Congregational United Chruch Of Christ in Geneva, Nebraska on Wednesdayat 10:30 a.m., July 9, 2014 with Pastor Jeff Jensen and Pastor Diane Ryder officiating. Casket bearers were Trevor Dohrman, Shawn Yates, Jake Herman, Jesse Salmon, Danny Loseke, and Jake Howe. Honorary casket bearers were Bryan Martin, Whittney Ullinger, Lindsay Martin, Austin Tatro, Brock Tatro, Carson Tatro, Kip Steuben and Mysticole Torda. Interment was in the Geneva Public Cemetery. Memorials are to be determined by the family at a later time. And in the end, it’s not the years in your life that counts. It’s the life in your years. Abraham Lincoln

Jake Reed Martin was born to Phillip Reed Martin and Teresa Marie Tatro Martin on April 23, 1993 in Glendale, Arizona and passed away July 2, 2014 at his home in Geneva, Nebraska at the age of 21 years, 2 months and 9 days. Phil, Teresa... View Obituary & Service Information

The family of Jake R. Martin created this Life Tributes page to make it easy to share your memories.

Send flowers to the Martin family.