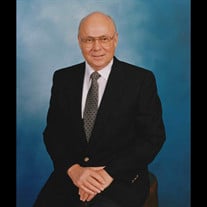 James Albert Biba was born on October 20, 1925 to William and Anna (Laun) Biba in Geneva, Nebraska. He passed away on September 20, 2017 in Geneva, Nebraska at the age of 91 years and 11 months. Jim was a lifelong resident of Geneva, Nebraska. During his senior year at Geneva High School, he qualified for the U.S. Navy’s V-12 program, and enlisted after graduation. The V-12 program equipped future naval officers with college degrees in war-essential fields like science, foreign language, and engineering. Jim was called to active duty on July 1, 1943 and sent to the University of Minnesota to study electrical engineering. He completed his bachelor’s degree in 1946 and was commissioned as an Ensign in the United States Navy. After finishing his studies, Jim served as an officer on the USS Cleveland CL55, a light cruiser operating in the Atlantic out of ports on the East Coast. Following his tour of duty, Jim returned home and continued his education at the University of Nebraska. He graduated with a Civil Engineering degree and joined his father in the road construction business. During Jim’s 50 years in the industry, his business, W. A. Biba Engineering Company, grew into one of the most respected highway construction firms in the state. Up until the time of his death, Jim could still recall details from many of the projects the company completed over his long career. The construction business afforded many opportunities to travel the state and work in and near a variety of Nebraska communities. While working on a project near Rushville, Jim met his future wife, Ruth, who was then the Sheridan County Home Extension Agent. In 1953, Jim married Ruth Esther Craft of Foster, Nebraska. They welcomed five children into their family: David, Debra, Gary, Gregg, and Linda. Jim enjoyed his work and the many people that he met through the construction business. He was a consummate planner, and enjoyed the challenge of organizing projects, whether the project at hand was a stretch of highway or improvements to the local cemetery. His other interests included family activities, travel, and aviation. He earned his pilot’s license in 1969 and owned several airplanes over the years. Jim and Ruth enjoyed traveling throughout the United States, Europe, and the Far East. They were committed advocates for education, making sure that their children and grandchildren had the opportunity to attend college. Jim was a lifelong member of the First Congregational United Church of Christ in Geneva. He was active in several professional organizations, serving as President of the Nebraska Associated General Contractors and as State Director for the National Asphalt Pavement Association. Jim was a 60-year member of the Masonic Lodge, and was Master during construction of the Geneva Lodge building. He also served on the Geneva School Board and in later years, enjoyed his work as a member of the Geneva Cemetery Association Board. Jim was preceded in death by his wife, Ruth; his son, David; his sister, Roma Brogan; and his parents, William and Anna Biba. He is survived by his children: daughter Debra and Rob Everts of Cambridge, MA; son Gary and Margo of Austin, TX; son Gregg and Paul Parks of Fletcher, NC; daughter Linda and Todd Shumaker of Lincoln; and daughter-in-law Susan Biba of Geneva. His grandchildren include Matthew Lambert, Catherine Biba, Brandon Biba and wife Brittni, Amanda Woodward, and Landon Shumaker; and his great-granddaughter, Addison Biba, and great-grandson, Luke Biba. Jim is also survived by his dear friend, Louisa Manning. A Private Funeral Service was held for Jim on Monday, September 25, 2017 at the Farmer & Son Funeral Home in Geneva. Frank Heinisch was the Celebrant. The recorded selection “Eternal Father, Strong To Save” was played during the service. Pallbearers for the service included Matthew Lambert, Catherine Biba, Brandon Biba, Amanda Woodward, Landon Shumaker, Rob Everts, Paul Parks, and Todd Shumaker. Interment was held in the Geneva Public Cemetery with Military Rites performed by the Nebraska National Guard – Military Honor Guard. Memorials are suggested to the Congregational Church, PO Box 405, Geneva, NE 68361 or the Geneva Temple Craft Association, 1620 J Street, Geneva, NE 68361. Farmer & Son Funeral Home of Geneva conducted the services. Online condolences may be left at www.farmerandsonfuneralhome.com

James Albert Biba was born on October 20, 1925 to William and Anna (Laun) Biba in Geneva, Nebraska. He passed away on September 20, 2017 in Geneva, Nebraska at the age of 91 years and 11 months. Jim was a lifelong resident of Geneva,... View Obituary & Service Information

The family of James Albert "Jim" Biba created this Life Tributes page to make it easy to share your memories.

Send flowers to the Biba family.