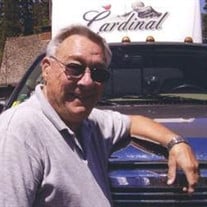 James Robert Glenn was born to James Wilson Glenn and Juliaetta Powers Glenn on October 23, 1936, at Quincy, Kentucky, and passed away July 16, 2014, at his home in Fairmont, Nebraska at the age of 77 years 8 months and 23 days. He was one of 7 children in the family. James lived in Quincy, Kentucky until he was the age of 8, when he went to live with an Aunt and Uncle in Dearborn, Michigan, where he resided until he was 18. On September 24, 1954 Jim enlisted in the United States Navy, where he was stationed in San Francisco, California. He was discharged on September 27, 1957, and was in the Navy Reserves until September 23, 1962. In 1963 he moved to Texas and worked numerous jobs. Jim was married to Karolyn K. Hodges of Bridgeport, Nebraska, on November 23, 1963 in Juarez, Mexico, and to them, 4 children were born. In 1965 Jim and Karolyn moved to Nebraska. In 1975 they found residency in Fairmont, Nebraska and Jim began work with Rite Way Oil and Gas, where he worked until 2005. In 2006, Jim and Karolyn pulled campers across the United States and Canada until 2012. He was a 40 year member of the American Legion Post 21. Jim and Karolyn are members of the Great Plain Church in Goehner, Nebraska. James was preceded in death by his Mother and Father, Mother-in-law, Arawanna Hodges-Ward of Fairmont, Son-in-law, Ron Ward of Fairmont, Sons, Howard Glenn of Lodgepole, and James Glenn Jr. of Grafton, Granddaughter, Candice Ward of Exeter, Brothers, Roy Norton of Lincoln, and Robert Sharp of Lincoln, Nebraska. Toddler Sister Shirley Glenn. He is survived by wife Karolyn Glenn of Fairmont; Daughter, Wilma Ward and husband Donnie Carmon of Indian Mound, Tennessee, Son, Roger Glenn and wife Olivia of Geneva; Brother, Ray Norton of Columbus, Ohio; Sisters Judy Rhoden of Portsmith, Ohio and Emily Braggs of Florida; sister-in-law Thelma Berggren and husband Tracy of York; 10 grandchildren and 16 great-grandchildren; many Nieces and Nephews. Funeral service for James will be 10:30 a.m. Monday, July 21, 2014, at the Fairmont Community Church in Fairmont, Nebraska. Interment will be in the Fairmont Public Cemetery. Visitation will begin Sunday at 1 p.m. until 8 p.m. with family greeting friends from 4 to 8 at the Farmer & Son Funeral Home in Geneva, Nebraska. Memorials are directed to the family for later designation.

James Robert Glenn was born to James Wilson Glenn and Juliaetta Powers Glenn on October 23, 1936, at Quincy, Kentucky, and passed away July 16, 2014, at his home in Fairmont, Nebraska at the age of 77 years 8 months and 23 days. He was one of... View Obituary & Service Information

The family of James R. Glenn created this Life Tributes page to make it easy to share your memories.

Send flowers to the Glenn family.