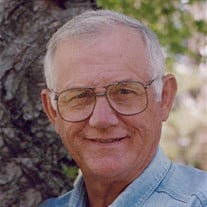 James W. Hubble was born to Lucile Whitham and James Henry Harriss Hubble on July 28, 1932 in Pomona, California. When he was fourteen they moved to a dairy farm in upstate New York near Hopewell Junction. Jim loved the farm, getting in the hay, milking the cows and hunting deer. He attended Wappingers Central School, graduating in 1950, and then attended Cornell University for one year. In 1951 Jim played one season of baseball and batted .345. He signed with the Phillies in 1952 and played one year as an outfielder with Bradford in the Pony League. From 1953-56 he signed with the Giants. He entered the army in 1954-56, playing with the 39th Infantry Regiment for two years. This team was the all European Champs in 1955 and 1956. Jim played outfield, was a starting pitcher, and was one of the leading hitters. He resumed professional baseball as a pitcher in the Giant's farm system in St. Cloud, Minnesota. Jim met his wife, Norma, in high school and they married in 1953. Four children were born to them; Donna, Melissa, Brenda and Jim Jr. Jim was drafted into the army in 1954 and served in Germany for two years. Returning home in 1956, he formed a business with Bruce MacGregor called Hubble and MacGregor. Jim built his first house in Verbank, NY, and lived there for ten years. In 1972 the family moved to Ocala, FL where Jim was called into the ministry. In the years following, he served where the Lord sent him, including Auburndale FL, Fort Plain NY, Colorado, and Maryland. Jim and Norma also spent two years in Belize, Central America. In 1993, Jim was called to Bethel Church in Carleton, NE, to serve as their pastor. He enjoyed preaching the Word, going to nursing homes, conducting community Easter services and speaking and playing his horn at memorial services locally. His heart was to study and preach the Word of God. He died peacefully at home, looking forward to meeting his Savior face to face! Thank you to all who loved and encouraged us over the years. Your prayers have carried us through our journey. Jim is survived by his wife Norma Kennedy Hubble, son Jim W. Hubble Jr., daughters Donna Lee Hubble Nichols and husband Harold C. Nichols, Melissa Hubble Replogle and husband Norman L. Replogle, Brenda Hubble Brown and husband Mark Brown, eleven grandchildren; Matt and Kami Nichols, Brian and Laura Van Fleet, Abigail Nichols, Tim and Emily Hines, Brett and Molly Hoehne, Aaron and Victoria Replogle, Jonathan Replogle, David Replogle, Joseph and Rebekah Utley, Ben Brown and David Brown; twenty-four great granchildren; sister Jean Hubble Knickerbocker and husband Raymond Knickerbocker; and sister-in-law Nancy Hubble in NY state. He is preceeded in death by his parents, his brother Edgar Hubble, and two great grandsons. The family will be conducting a Memorial Service for Jim at 10:30 a.m. Wednesday, September 28, 2016, at the Bethel Church of the Brethren, rural Carleton, Nebraska. Memorials are directed to the family for later designation in lieu of flowers

James W. Hubble was born to Lucile Whitham and James Henry Harriss Hubble on July 28, 1932 in Pomona, California. When he was fourteen they moved to a dairy farm in upstate New York near Hopewell Junction. Jim loved the farm, getting in the... View Obituary & Service Information

The family of James W. Hubble created this Life Tributes page to make it easy to share your memories.

Send flowers to the Hubble family.