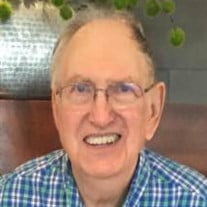 A Memorial Mass of Christian Burial for James will be held on Thursday, June 11, 2020 at 10:30 a.m. at St. Stephen Catholic Church in Exeter, Nebraska with Father Brendan Kelly presiding. Praying of the Rosary will be held prior to the Mass at 10:00 a.m. on Thursday at St. Stephen Catholic Church in Exeter, Nebraska. Graveside Services conducted following the Mass at the Exeter Cemetery. Memorials are to be directed to the family to be designated at a later date. A Livestream Video of the services will begin at 10:00 a.m. To view the Livestream Video you can go to Farmer & Son Funeral Home's Facebook Page or in your search engine type @friendlyfuneraldirectors and click the link to Farmer & Son Funeral Home's Facebook Page. Due to the COVID-19 restrictions we ask that you follow these guidelines set by the Department of Health & Human Services. Please continue the appropriate social distancing and COVID-19 precautions which includes maintaining six feet of distance between parties (6 people to a group) and/or individuals. A "party" should be understood to include members of a household who live together and therefore may be standing together at the church and/or cemetery, but should maintain the six feet of social distancing from other parties. James “Jim” Patrick Morgan, 80, died of complication due to Parkinson Disease on June 5, 2020, at Prestige Care Center of Plattsmouth, Nebraska. He was born August 2, 1939 at his family farm near Exeter, Nebraska, the son of James “Pat” and Elizabeth (Clausen) Morgan. Jim helped with farm work which included his chore of feeding the pigs. He also showed his livestock at the York County Fair, was a member of 4-H and his local FFA. He was a member of the Boy Scouts where he really enjoyed his duties ushering at the Nebraska Football games. He was baptized and confirmed at St. Stephen Catholic Church in Exeter. Jim graduated from Exeter High School, class of 1957. After High School, he attended Business School in Lincoln, Nebraska. Besides his love for Nebraska Cornhusker sports and his Catholic Faith, he enjoyed his danish crepes and chocolate cake. Jim never knew a stranger. He enjoyed visiting and meeting people wherever he went. Jim married Diana Steward on September 5, 1987 in Omaha, Nebraska. They were married 32 years. Jim was a loyal member of the Knights of Columbus where he enjoyed serving communion to shut-ins. In addition to his parents, he was preceded in death by his daughter-in-law, Kaysha Morgan. Surviving in addition to his wife, Diana (Steward) Morgan, are his sons Darrell Morgan and his wife Laurie of Cave Creek, Arizona; Pat Morgan of Tulsa, Oklahoma, his daughter Deborah Craig and husband Barry of Rose Hill, Kansas; step-son Adam Steward and his wife Lori of Louisburg, Kansas: and step-daughter Melanie Milledge and her husband Allen of Omaha, Nebraska. Jim has 10 grandchildren; Brian Morgan, Michael Morgan, Isaac Morgan, Danielle Fischer, Megan Eldridge, Joshua Steward, Katie Steward, Benjamin Steward, Kayla Milledge and Tessa Milledge. Great-grandchildren include Kayleigh Fischer, Kaia Fischer, Hudson Eldridge and Blakely Eldridge. He is also survived by his brothers Dennis and wife Kathleen; John and his wife Janet; along with several nieces and nephews.

A Memorial Mass of Christian Burial for James will be held on Thursday, June 11, 2020 at 10:30 a.m. at St. Stephen Catholic Church in Exeter, Nebraska with Father Brendan Kelly presiding. Praying of the Rosary will be held prior to the Mass... View Obituary & Service Information

The family of James Patrick Morgan Jr. created this Life Tributes page to make it easy to share your memories.

A Memorial Mass of Christian Burial for James will be held on...

Send flowers to the Morgan family.