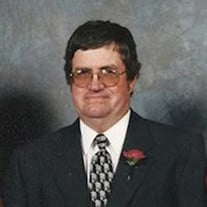 James Leslie Stephenson was born to Leslie Howard Stephenson and Elsie Elvira Osborn Stephenson on August 14, 1952, at York, Nebraska, and passed away July 1, 2014, in Lincoln, Nebraska, at the age of 61 years, 10 months and 17 days. He was one of three children in the family. Jim grew up on the family farm just outside of Fairmont, and attended Fairmont Public School from which he graduated in May, 1970. In high school he enjoyed playing basketball. After graduating, he attended Central Community College in Hastings, Nebraska, earning his degree in Diesel Technology. He put that technical knowledge to use as he continued to farm with his father, brother Lowell, and later nephew Loren, planting and harvesting corn, soybeans, as well as raising hogs. Jim grew up in the United Methodist Church in Fairmont where he was baptized and confirmed. He later joined the United Methodist Church in McCool Junction, of which he was a member at the time of his death. Jim was married to Janet Kay Fankhauser of Tecumseh, Nebraska, on August 4, 1979, and to them two children were born – Caroline Renee and Cassandra Marie. Jim was so proud of his daughters and their accomplishments, and supported them through their participation in sports and activities throughout their school years, coming to their ball games and events whenever he was able to. He faithfully hauled livestock to the county and state fair for both daughters during their 4-H and FFA years. Later, he enjoyed hearing about their college and professional school experiences, and was so proud to be an “Alpha Xi Delta Dad” to both of them. He was also pleased to be Grampy to Katie and “little James”, and had so much fun playing with them and teasing them as only a Grampy could. It was no secret that Jim had a love and passion for farming. It was in his blood; he grew up on the farm and worked very hard alongside his family everyday to channel that passion into the farming operation they created. He was tied to the land and his profession, even when he was not able to participate in the ways he had been accustomed to. He dedicated his life’s work to being attuned to the earth and what it could bring forth, and instilled a strength and work ethic into his family and children that we are proud to continue on. He was proud that in 2011, the farm received the Nebraska Pioneer Farm Award from the Ak-Sar-Ben Foundation for 100 Years of continuous family ownership. Jim also had a love for animals, particularly dogs. He could be seen driving around the country, checking on his pivots and fields with his faithful lab/blue heeler mix, Jenny, in the back or cab of his pickup truck. Sometimes his three other dogs, Maddie, Freckles and Atlee, would get to ride along too. He loved antique farm tools, machinery, and enjoyed seeing them at the Nebraska State Fair which he never missed attending. He was also an International Harvester memorabilia collector. With that, he also loved all kinds of history. Jim had a great knowledge of local history, genealogy, and early settlement of the Fairmont area. He loved to share this with his family and friends, and we loved to hear his extensive knowledge from his incredible memory. Jim had such a kind soul; he was friendly to everyone he met and always had time to visit with his friends and acquaintances no matter where or when their paths would cross. He was even-tempered, good natured, and had a fun and witty sense of humor. We will so greatly miss all that he brought to this world and our lives. His greatest loves were to be working on his farm and to be around all of his family. His life and the way that he lived it was a true reflection of God’s love for us and His creation. Jim was preceded in death by his parents, Leslie Howard Stephenson and Elsie Elvira Osborn Stephenson, both of Fairmont, Nebraska. He is survived by his wife, Janet; his two daughters, Caroline and husband Christopher Marciano of Houston, Texas and Dr. Cassandra and husband Bryan Heath of Salina, Kansas; his two grandchildren, Kathryn Renee Marciano and James Arthur Marciano of Houston, Texas; a sister, Barbara Jean Leefers and husband, Milton, of Unadilla, Nebraska; a brother, Lowell Stephenson, of Fairmont; parents-in-law Densel and Irene Fankhauser of Tecumseh, Nebraska; sisters-in-law Charlotte Grof of Lincoln, Nebraska and Carolyn Coldwell and husband, David, of Bowling Green, Kentucky; nephews Loren Stephenson of Fairmont, Chad Leefers of Houston, Texas and Doyle Leefers of Smithville, Missouri; niece Teresa (Stephenson) Rodriguez of Pecos, New Mexico; and many other relatives and friends. Funeral services will be conducted from McCool Junction United Methodist Church, McCool Junction, Nebraska, on Monday, July 7, 2014 at 10:00 a.m. with Pastor Ralph Gaines officiating. Annie Hall will serve as organist, and Delores Bailey will accompany Chelsey Tyburski who will sing “How Great Thou Art” and “He Leadeth Me”. Pallbearers will be nephews Loren Stephenson, Chad Leefers, and Doyle Leefers; sons-in-law Christopher Marciano and Bryan Heath; and brother-in-law David Coldwell. Interment will be in the Fairmont Public Cemetery with Farmer & Son Funeral Home in charge of arrangements. Memorials are directed to York Adopt-A-Pet and the Fairmont Cemetery Association.

James Leslie Stephenson was born to Leslie Howard Stephenson and Elsie Elvira Osborn Stephenson on August 14, 1952, at York, Nebraska, and passed away July 1, 2014, in Lincoln, Nebraska, at the age of 61 years, 10 months and 17 days. He was... View Obituary & Service Information

The family of James L. Stephenson created this Life Tributes page to make it easy to share your memories.

Send flowers to the Stephenson family.