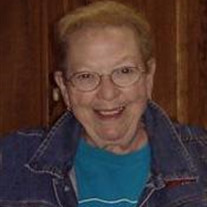 Janet Ann (Garrett) Vavra was born on May 5, 1940, in Geneva, Nebraska, to William “Pete” & Edna (Brower) Garrett and passed away on Tuesday, December 18, 2012, at the Nebraska Heart Institute in Lincoln, Nebraska, at the age of 72 years, 7 months, and 13 days. She was one of two children in the family. As a young girl she was baptized at the Geneva Congregational United Church of Christ in which she was a member of the congregation for over fifty years. She also taught Sunday school there in her younger years. She attended Geneva High School and graduated with the class of 1958. After graduation, she attended Lincoln Beauty Academy and received her cosmetologist license and later worked for Mollene Gergen. She also worked for Lincoln Telephone and Telegraph as a switchboard operator. Janet was united in marriage to Stuart Lee Vavra of Milligan, Nebraska on March 8, 1963, in Geneva, Nebraska. In March of 2013 they would have celebrated their 50th wedding anniversary. To this union two daughters were born: Jana Marie and Jodene Renae. Together they made their home on the farm northwest of Milligan. Janet was a stay-at-home Mom while the girls were little. She later worked for KMI Mobile Home Manufacturing in Geneva. Her biggest enjoyment was babysitting in her home with some special children whom were very dear to her heart. After her girls attended high school, she worked at Milligan House of Meats and The Food Basket for Charlie and Mary Uldrich. She was also a member of the Milligan HSSK Post 240 Legion Auxiliary. Janet spent twenty-five years of her marriage sitting in the grandstands watching her husband, “Super Stu,” compete in stock car racing. Weekends consisted of traveling from racetrack to racetrack throughout Nebraska. During their racing years, she and her husband met many dear friends. After Stu retired from circling the racetracks, she spent her later years following her twin grandsons racing. She spent timeless hours out in the garage watching the boys work on their racecars and cooking them homemade suppers. She was their number one fan. She also enjoyed attending her granddaughters sporting events, dance, and piano recitals. She was very proud of all the grandchildren’s accomplishments. Janet enjoyed bidding at auctions, rummaging through garage sales, searching for good buys at thrift shops, traveling Nebraska’s Junk Jaunts with friends, and finding treasures at storage unit sales. In Janet’s spare time, she also enjoyed reading, doing word searches, and embroidering. She was able to embroider each grandchild a baby quilt and a quilt for each of her daughters too. Janet was preceded in death by her parents, Pete & Edna Garrett; father-in-law and mother-in-law Edward & Lillian Vavra; brother and sister-in-law Dean & Charlotte Garrett; and brother-in-law Victor Hladky. She is survived by her husband, Stuart of Milligan, NE; daughter and son-in-law Jana & Billy Slezak of Milligan, NE; daughter and son-in-law Jodene & Tom Lovegrove of Fairmont, NE; grandchildren Shane Slezak of Lincoln, NE, Shawn Slezak & Taylor Slezak of Milligan, NE, Whitney Lovegrove & Sydney Lovegrove of Fairmont, NE; sister-in-law Shirley Hladky of Seward; brother-in-law and sister-in-law Edwin & Beth Vavra of Milligan, NE; special acquaintances Jasmine, Noah, Lily, Jen & Kaydence; nieces and nephews and a host of other relatives and friends. A memorial service for Janet was held on Saturday, December 29, 2012 at 10:30 a.m. at the Milligan Auditorium in Milligan, Nebraska with Kim Dunker officiating the services. Musical selections played were “Remember When,” “Kiss An Angel Good Mornin,” “I Want To Stroll Over Heaven With You,” and “I’ll Fly Away.” Honorary bearers for the service were her devoted grandchildren. Interment will take place at a later date with a private family graveside service at the Bohemian National Cemetery, Milligan, Nebraska. Farmer & Son Funeral Home was in charge of the arrangements. Memorials are directed to the family and will be designated at a later date.

The family of Janet A. Vavra created this Life Tributes page to make it easy to share your memories.