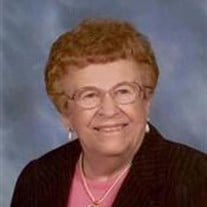 Jarmilla Kottas, 6th child of Albert and Antonie Kabes Novak, was born on August 18, 1917, on a farm in Saline County located ½ mile north and 3 east of Milligan, Nebraska. She died at the Friend Manor in Friend, Nebraska on March 18, 2012 at the age of 94 years and 7 months. She attended grade school in Prairie Queen School District #48 in Saline County. After graduating from the eighth grade she attended Milligan High School and graduated in May 1933. After graduation she helped her folks on the farm until 1936 when she went to Berwyn and Riverside, Illinois where she did housework and cared for small children. She married Otto Kottas on November 26, 1938 in the courthouse at Wilber by acting Judge J J Grimm. They started their wedded life on a farm 2 ¼ miles south of Milligan where they lived for five years. A daughter Arline was born there. In March of 1944 they bought a farm two miles south and one west of Milligan. Their second daughter Jean was born at this location. After Otto’s death in October, 2000 she remained on the farm until her move to the Friend manor in August 2008.  She was a member of the Milligan United Methodist Church and Milligan Lodge #76. She was the Lodge treasurer for over 50 years and held offices in the WFLA and also the Milligan Auditorium Corporation.   Jarmie loved her family and enjoyed entertaining them with her excellent cooking. A hobby was tending to her flower gardens and canning the fruits of her labor grown in her vegetable gardens.   Otto and Jarmie volunteered many hours to various community services, the auditorium and the cemetery.  Many friends were made going to Polka dances and many trips were taken with the Becwar Tours. Through these tours they were able to visit Czechoslovakia, the homeland of her parents.  Survivors include her daughters Arline and husband Charles Vossler of Friend, Jean and husband Gary Lisec of Oxford; grandchildren Tom and Mary Lou Vossler of Exeter, Kent and Lori Vossler of Lincoln, Wayne and Rachel Vossler of Exeter, Laura and Neal Saxton of Yuma, Colorado, Neil and Angie Lisec of Omaha; great grandchildren Julia and Rebecca Vossler, Megan Vossler and her fiancée Jesse Spencer, Sam and Ben Vossler, Trenton, Joleen and Joel Vossler, Colby and Brittany Schelling, Kelsie Schelling, and Clare and John Lisec; step great grandchildren Sierra and Bailey Saxton and Mitch and Mary Schlegelmilch; sister Emily Betka of Beatrice; nieces and nephews and numerous friends.  She was preceded in death by her husband, parents, brothers Frank and Edward; sisters Anna Jansky, Ella Hrouda, Rose Meyer and Angeline Kottas.Funeral services for Jarmilla will be Wednesday, March 21, at 2:00 p.m. at the Farmer & Son Funeral Home - Kotas Chapel in Milligan. Visitation will begin Tuesday at 1:00 p.m. until 8:00 p.m. with family greeting friends from 5:00 until 8:00. Interment will be in the Bohemian National Cemetery. Memorials are directed to the Kottas Family.

Jarmilla Kottas, 6th child of Albert and Antonie Kabes Novak, was born on August 18, 1917, on a farm in Saline County located ½ mile north and 3 east of Milligan, Nebraska. She died at the Friend Manor in Friend, Nebraska on March 18, 2012... View Obituary & Service Information

The family of Jarmilla Kottas created this Life Tributes page to make it easy to share your memories.