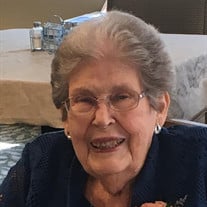 The family of Jean Ashby will have a Private Graveside Service at Geneva Public Cemetery with Pastor Stuart Davis presiding. Public visitation will be held on Monday, April 22, 2019, from 1:00 p.m. until 8:00 p.m. with family greeting the public from 4:00 p.m. until 6:00 p.m. at Farmer & Son Funeral Home in Geneva, Nebraska. Memorials are to be directed to: Geneva Fire Department C/O Mike Grothe 600 F St Geneva, NE 68361 Fillmore County Hospital Foundation 1900 F Street Geneva, NE 68361 First Congregational United Church of Christ 906 H Street Geneva, NE 68361 Jean F. Ashby was born August 30, 1919 in Council Bluffs, Iowa to Charles B. and Laura May (Mary) Smith Fricke. She passed away on April 17, 2019, at Heritage Crossings Nursing Home in Geneva, Nebraska at the age of 99 years 7 months and 18 days. Jean’s father was a pharmacist and taught at Creighton University. In 1921, the family moved to Columbus, Nebraska where her father bought an interest in a drug store. Jean attended grade school and high school in Columbus, graduating in 1937. She was a member of the Presbyterian Church, a Girl Scout, president of the German Club and a member of the Latin Club. She worked on the school newspaper, sang in the chorus and performed in operettas, along with participating in girls’ sports where she earned her “C” letter. From an early age, Jean worked at the family drug store, from soda jerk in high school to assistant manager during WWII (which led to her lifelong obsession with root beer floats.) After graduating from high school, she attended Doane College in Crete for two years. While at Doane, she was a member of Alpha Lambda Delta Honorary Society and a member of Sigma Tau social sorority, played drums in the all-girl Drum Corp, and was member of the German Language Club. Jean transferred to Northwestern University in Evanston, Illinois and graduated in 1941 with a Bachelor of Science Degree in Abnormal Psychology (which she later claimed was extremely useful after joining the Ashby family). She joined Alpha Chi Omega sorority. After graduation, Jean was employed with John Nuveen & Co., a municipal bond firm in Chicago, working as a receptionist before promotion to the training department. While living in Chicago, she lived with three other Nebraska girls. It was in Chicago during the summer of 1942 when her life completely changed after an introduction to Charles Ashby, MD by his cousin Fred, who worked in the same firm as Jean. Charles had started his internship at Wesley Memorial Hospital. A whirlwind courtship ensued that summer, but Charles reported for active duty in the Navy in Washington, DC in September. There, he received his assignment to report to San Francisco to become the ship’s doctor for the USS Twining Destroyer. Jean left Chicago and headed home to Columbus to work at the drugstore. Although Charles said that he didn’t believe in wartime marriages, by the end of September he phoned Jean (at 2:00 a.m.) and proposed. One week later she bravely caught a train by herself to San Francisco and five days later they were married. After Charles returned from the Pacific, they were stationed at the Great Lakes Naval Training Station, and then posted to the Hastings Ammunition Depot where they lived until his release from duty in 1947. Charles and Jean returned to Fillmore County where Charles began practicing with his father, Dr. Bert, in Fairmont until moving to Geneva where Jean lived the rest of her life. In 1951, Charles and Jean adopted Sarah and six years later they adopted Jim. She felt very blessed to have them as their beloved children. Life became exceedingly busy. Charles worked day and night. Jean was active in the Congregational Church, serving as a circle officer, also Kensington Club, PEO, Saddle Club, Bridge Club, Supper Club, and the long running “Pool Party” (a group that met weekly during NU football season). Jean was very active in the Nebraska Women’s Medical Auxiliary, developed a babysitting training course, and named “Woman of the Year” by the Auxiliary in 1972. Jean’s main hobby was gardening, with a huge vegetable garden and extensive flowerbeds. Roses were her specialty and she always had 60 to 90 hybrid tea roses in her garden. Jean and Charles were also avid golfers and she served as President of Women’s League even winning a few trophies. Charles and Jean traveled all over the USA for medical meetings, including Hawaii. They also traveled to Mexico and Jamaica. In later years they began to cruise all over the world, including many, many cruises with their children and grandchildren. Jean was one of the last true matriarchs—the glue that held her family together with dignity and strength of character, a strong will and a deep sense of propriety. She relished her role as a doctor’s wife, a mother, a granny, and a great-granny to her Ava Jean. As with all who lived through the depression, she never took anything for granted. She was generous and kind with a very strong faith and a deep sense of duty to her community, giving her time, money, and effort throughout her life. Jean loved filling her beautiful home with art and collectibles and feeding every bird in the county, including a very lucky stray wild turkey that became her pet. Her life was filled with love and laughter. Her wicked sense of humor was legendary, always vigilant on spot patrol, tasting fork, and saltshaker at the ready, and the shout of “that’s wretched” whenever it was needed. She will be missed. Jean was preceded in death by her parents, her sister Mary Kay, and her husband, Charles. She is survived by her daughter, Sarah and husband Tony Sawtell of Santa Fe, New Mexico; son, Jim and wife Janice of Geneva, and grandchildren Katherine and Ed Mirecki, Andrew and Kyla Sawtell with great-granddaughter Ava Jean Sawtell, all of Gig Harbor, Washington; Meredith and Daniel Silvernail of Columbus, Ohio and Charles Ashby of Lincoln; and her sister Doris Corbridge of Naperville, Illinois; and numerous nieces and nephews and their families

The family of Jean Ashby will have a Private Graveside Service at Geneva Public Cemetery with Pastor Stuart Davis presiding. Public visitation will be held on Monday, April 22, 2019, from 1:00 p.m. until 8:00 p.m. with family greeting the public... View Obituary & Service Information

The family of Jean F. Ashby created this Life Tributes page to make it easy to share your memories.

The family of Jean Ashby will have a Private Graveside Service...

Send flowers to the Ashby family.