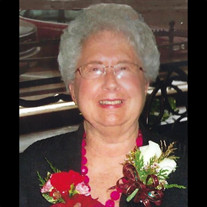 Jean Harriett Lovegrove was born to Harry Wyman Weddel and Olga Rose (Koenig) Weddel on December 25, 1930, in Carleton, Nebraska, and passed away on December 30, 2020, at the Blue Valley Lutheran Nursing Home in Hebron, Nebraska, at the age of 90 years and 5 days. She was the youngest of two children in the family. Jean was born and raised in Carleton, Nebraska, where she attended grade school and high school and graduated in 1948. From an early age, Jean worked at the family grocery store, Weddel’s Store, and filled in as a telephone operator at the Telephone Office during high school. She was a proud alumni of Carleton High School and looked forward to celebrating Milo Days. After graduating from high school, Jean attended Stephens College in Columbia, Missouri, and graduated in May of 1950 with an Associate of Arts Degree. She loved telling the story of the 1948 blizzard and being stuck on the train trying to get home from college. She also loved going to Nebraska football games with her parents in the 1940’s when the knothole tickets were 50 cents. Those season tickets have been held in the family for over 70 years. Jean met Dale Edward Lovegrove at a dance in Bruning, Nebraska, and they were married on November 26, 1950, at the Brethren Church in Carleton. They went on a three-week honeymoon road trip to California and visited several cities along the way. They were blessed with three children. Jean was very active helping her husband on the farm and drove grain trucks for many years. She became a widow at the age of 38 while vacationing with her family in Texas for the 1969 Nebraska bowl game. After Dale’s death, Jean continued to travel to several different countries with friends and family. She enjoyed being involved in the farm operations delivering meals and watching harvest. Jean was very active in her children and grandchildren’s activities. Jean was one of the last true, independent matriarchs--the glue that held her family together. Jean enjoyed collecting antiques and loved to socialize with her family and friends. She was preceded in death by her husband, Dale Lovegrove; her parents, Harry and Olga Weddel; her sister, Marjorie Werner and husband Elmer Werner; sister-in-law Lila Bettger and husband Robert; brother-in-law Robert Dean Lovegrove; and sister-in-law Margorie Burt and husband Keith Burt. She is survived by her daughter, Susan Taylor and husband Michael of Geneva; daughter, Shari Lovegrove of Fairmont and special friend Warren Wilson; son, Tom Lovegrove and wife Jodene of Fairmont; sister-in-law Shirley Lovegrove of Fairmont; grandchildren, Dan Taylor and wife Amber of Geneva; Dayle Harlow and husband Derek of Geneva; Kimberly Taylor and husband Aaron of Wellsville, Kansas; Kelly Sladek and husband Tim of Cozad, Nebraska; Whitney Lovegrove of Geneva and special friend Tobias Smith; Sydney Lovegrove of Columbus and fiancé Parker Ridgeway; great-grandchildren, Brooke and Creighton Taylor; Taylor, Beau and Lane Harlow; Jake and Nathan Taylor; Hailey and Kenzie Sladek; and numerous nephews, nieces, relatives and friends. A Memorial Service For Jean was held on Saturday, January 2, 2020 at the United Methodist Church in Geneva, Nebraska. Pastor Doug Griger officiated the Service. The recorded selections “In The Mood,” “Stompin’ At The Savoy,” and “When The Saints Go Marching In” were played during the service. Honorary pallbearers for the service included Kim Taylor, Daniel Taylor, Kelly Sladek, Dayle Taylor, Whitney Lovegrove, and Sidney Lovegrove. A Committal of Ashes was held in the Geneva Public Cemetery following the Memorial Service. Farmer & Son Funeral Home was in care of the arrangements and online condolences can be left at www.farmerandsonfuneralhome.com Memorials are suggested to the Fillmore County Hospital Foundation at 1900 F Street, Geneva, NE 68361 or the United Methodist Church at 942 H Street, Geneva, NE 68361.

Jean Harriett Lovegrove was born to Harry Wyman Weddel and Olga Rose (Koenig) Weddel on December 25, 1930, in Carleton, Nebraska, and passed away on December 30, 2020, at the Blue Valley Lutheran Nursing Home in Hebron, Nebraska, at the age... View Obituary & Service Information

The family of Jean H. Lovegrove created this Life Tributes page to make it easy to share your memories.