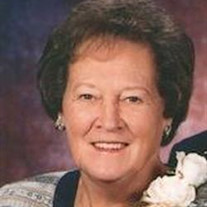 Jean Marie Becker Volkmer was born on January 5, 1928 to William and Elizabeth Kelly Becker.  She was baptized at St. Joseph’s in Geneva, received her first communion and was confirmed at St. Stephen’s in Exeter and was married in this vary Church. Mom was the youngest of four children.  Her brothers and sisters were Bill, Elaine, and Lenore. She spent her entire lifetime of 86 years with in the small radius of Geneva and Exeter.  Attending school districts 68, 24, and St. Stephen’s Catholic School. Our mother met our father while yet in high school.  Both were at a Catholic picnic and dance. While mom was only 17 dad was 23 years old.  He told her quite sometime later that on that very evening he decided he would someday marry her. Ervin Joseph Volkmer married Jean Becker on November 26, 1946. As a young couple they would travel from the southern states to North Dakota with dad’s custom combining. They were not alone, the crew included mom’s brother Bill and dad’s youngest brother John plus some other fellows.   Mom had many great stories about the adventure of the harvest years. As the children started arriving her life changed.  They lived on acreage at the edge of Geneva then moved near Strang and with another move they resided several years on a farm located close to Martland and Shickley. Our mother had the strength and fortitude of steel and a gentle heart of gold. With 7 children under her wings the responsibilities and work never ended.  Not only as a wife and mother she helped dad on the farm with chores and fieldwork. As her children grew up she was employed at the Exeter Rest Home, Exeter Public School (helping children read), the Exeter Bar and Dale’s Electronics. She and our father then ran the Exeter Donut Shop together for several years. Mom was never without work yet to be done.  It seemed to us she could do it all.  She even saved a child’s life as the child came to her choking on a jawbreaker stuck in his throat.After dad fell ill in 1986 her life changed.  Now she would devote many years to helping care for our father. She would be at his side for his entire life.  Mom was a member of the St. Stephen’s Church and Altar Society. She entered the Exeter Care Center on December 27, 2005 and lovingly called it her home until her passing.  She had a passion for reading and loved to dance with our father. Mom also enjoyed playing cards and having company.  Their home was always busy and full of people. Mom and dad were the reason for our family reunions, picnics and holiday gatherings. Anyone in need could come to our home and they always had room for one more and request for help was never too great. Jean was preceded in death by her parents; husband Ervin, son Thomas, grandson Travis and great grandson Jonas. She is survived by Dennis (Kathy) Volkmer of York, Ann (John) Copple of Lincoln, Mary (Bruce) Kiederling of Chesapeake, VA, William “Bill” (Terri) Volkmer of Exeter, John (Deb) Volkmer of York, and Sarah (Fred) Analla of Athens, IL, 12 grandchildren and 16 great grandchildren. She entered her eternal home on Monday, February 10, 2014. Mom will be missed but remembered as a loving and dedicated wife, mother, grandmother, great grandmother and friend. Her kindness generosity and loyalty to those around her will not be forgotten and will be greatly missed. We will hold her in our hearts forever and cherish the days, years and memories we had with her. Funeral Mass for Jean will be 10:00 a.m. Saturday, February 15, 2014, at the St. Stephen's Catholic Church in Exeter, Nebraska. Visitation will be held on Friday from 1:00 p.m. until 5:00 p.m. at the Farmer Funeral Home in Exeter. Rosary will be recited at 7:00 p.m. Friday at the St. Stephen's Catholic Church. Interment will be in the Exeter Cemetery and memorials are directed to the St. Jude Childrens Hospital or Exeter Fire and Rescue Units

Jean Marie Becker Volkmer was born on January 5, 1928 to William and Elizabeth Kelly Becker.  She was baptized at St. Joseph&#8217;s in Geneva, received her first communion and was confirmed at St. Stephen&#8217;s in Exeter and was married in... View Obituary & Service Information

The family of Jean Marie Volkmer created this Life Tributes page to make it easy to share your memories.

Jean Marie Becker Volkmer was born on January 5, 1928 to William...

Send flowers to the Volkmer family.