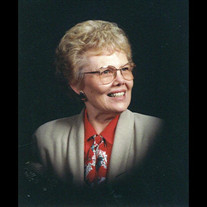 Jeannine Marie (Wadman) Krejci, 89, passed away on January 23rd 2019 at Fairview Manor in Fairmont, Nebraska. She was the only child born to Lloyd and Helen Wadman in Exeter, Nebraska on February 8th, 1929. She attended Exeter Public Schools and graduated in 1946. She attended Business School in Omaha. Jeannine and her high school sweetheart, William “Bill” Krejci, were married on Sept 6, 1947, at the First Congregational Church in Exeter, Nebraska. Bill and Jeannine were blessed with four children during their 38 year union. They made their home south of Exeter and later south of Burress where Bill farmed and Jeannine became a farm wife until Bill’s death in 1985. In 1952, when she had a 4 and 2 year old, she contracted polio and knew God helped her recover. She was very independent and continued to live on the farm as a widow with the help of her son, Bill, and son-in-law, Bob, doing the farming. In 2012, she moved to the Exeter Care Center until it closed in 2015. She then moved to the Fairview Manor in Fairmont, NE until she passed away. Through the years she was active with the United Church of Christ in Exeter as Sunday school superintendent, teacher, organist, music director, and women’s fellowship. She led 4-H clubs, was active in Woman’s Club, taught tap dance and piano, and led the Exeter Forever Fit Exercise class for many years. She had the gift of playing the piano by ear and could play any song requested. She loved taking care of her home on the farm and always kept it mowed and planted flowers every spring. She loved her Burress Bell friends, and they celebrated many fun birthdays together. She loved her family, and she loved life. She made sure that each of her grandchildren could come out separately to the farm for their special day. She attended as many of their school activities as possible for many years. She loved God and served him well with her many talents. Jeannine was preceded in death by her husband William; daughter Karen Pelz; daughter-in-law, Dixie Krejci; parents, Lloyd and Helen Wadman; parents-in-law Edward and Agnes Krejci; sister-in-law Helen Spitler; and brother-in-law Edward Krejci. Jeannine is survived by her daughters, Patricia (Robert) Becker and Sherry (Gary) Dumpert both of Exeter, Nebraska; son William Krejci of Exeter, Nebraska; grandchildren Jeremy (Carol Griencwic) Becker, Papillion, Nebraska, Kimberly (Joe) Panepinto, Castle Rock, Colorado, Jennifer Nabb, Dallas, Texas, Nicki (Jason) Alexander, Laramie, Wyoming, Jason (Renee) Dumpert, Omaha, Nebraska, Willie (Julie Birkes) Dumpert, Exeter, Nebraska, Jackson (Alexandria) Krejci, Lincoln, Nebraska, Dillon (Amanda) Krejci, Lincoln, Nebraska, TaLisa (Ty) Brown, Hays Springs, Nebraska, Melinda (Bill) Baker, Dewitt, Nebraska and Tracy (Kevin) Beranek, Milford, Nebraska; great-grandchildren Paxton, Rory, and Caleb Panepinto, Emma and Nolan Dumpert, Felicity Krejci, Kaylee and Carter Krejci, Nash Brown, RJ Clevenger, Dravin Birkes, Kayleigh (Trent) Whisler, Riley (Eugene) Shores, Dillon (Heather) Baker, Regan, Rio, Kenneth, and Aleah Beranek.; and great-great-grandchildren Elliot and Charles Whisler, Ty Baker and William Baker. A Funeral Service for Jeannine was held on Saturday, January 26, 2019 at 10:30 a.m. at the United Church Of Christ in Exeter. Pastor Stuart Davis officiated the service. Dianne Hanson provided the prelude and postlude music and Shirley Milton accompanied Brad Ramp in the singing of “The Lord’s Prayer” and “In The Garden.” Pallbearers for the service included Jeremy Becker, Kimberly Panepinto, Jennifer Nabb, Nicole Alexander, Jason Dumpert, Willie Dumpert, Jackson Krejci, Dillon Krejci, and TaLisa Brown. Interment was held in the Exeter Cemetery following the Funeral Service. Farmer & Son Funeral Home was in care of the arrangements and online condolences can be left at www.farmerandsonfuneralhome.com. Memorials are suggested to the United Church of Christ or in care of the family.

Jeannine Marie (Wadman) Krejci, 89, passed away on January 23rd 2019 at Fairview Manor in Fairmont, Nebraska. She was the only child born to Lloyd and Helen Wadman in Exeter, Nebraska on February 8th, 1929. She attended Exeter Public Schools... View Obituary & Service Information

The family of Jeannine M. Krejci created this Life Tributes page to make it easy to share your memories.