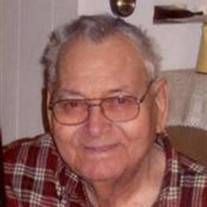 Jerome Albert Filipi was born to Albert Filipi and Rosie Zenisek on January 6, 1927 on the family farm near Tobias Nebraska. He passed away on March 5, 2011, at his home near Dorchester, Nebraska at the age of 84 years, 1 month and 27 days. He was one of 5 children in the family. Jerome attended Opossum Hill school through 8th grade. He graduated from Tobias High School in 1944. As a young boy he liked trapping, hunting and fishing with his brothers and friends. After graduation Jerome stayed on the family farm and helped his folks and uncles farm. Jerome met his wife Norma at a dance at Tabor Hall in the summer of 1947. They were united in marriage on January 6, 1948. Together they enjoyed traveling, fishing, dancing and playing cards. The couple lived in rural Tobias for 12 years where they farmed and raised 2 of their 3 children, Rogene and Karen. They moved to the Friend area in 1960 when their 3rd child Sharon was born. Jerome was self employed all his life as a farmer which he raised the usual crops, cows and pigs. He enjoyed fishing with his family especially his grandsons, which he caught his largest fish in his life, a 32 pound yellow catfish. He was so proud! Jerome loved being out doors. He took every opportunity to go hunting with his family. He was always devoted to his grandchildren with a smile on his face. He spent many hours playing games, hunting and fishing with them. Not to mention all the baby-sitting he did in his early years, while the women went shopping. Jerome was very positive and determined and will be greatly missed. Jerome was preceded in death by his parents, Albert and Rosie Filipi, sister Emma Williams, brother Arnold Filipi and Jerome's wife for 62 years, Norma. He is survived by son and daughter-in-law Rogene and Cal of Wilber; daughters and son-in-law Karen and Larry Kotas, of Western, and Sharon and fiance Jerry Hausmann of Lincoln; eight grandchildren and spouses, Michelle and Dean Pester of Cortland, Kyle and Melissa Filipi of Lincoln, Cory Filipi of Martell, Bryan and Kim Kotas, Jeff and Tammy Kotas, Michael Kotas and fiance Kerry Tinsley, Jason Kotas, all of Western, Jamie Gillispie and friend Connor Wobig of Lincoln; and great grandchildren Tyler and Haylee Pester, Kaleb, Jacob, Cody, Adam and Kiley Kotas, and Michael and Megan Tinsley. Funeral service were conducted from the Farmer & Son Funeral Home-Kotas Chapel, Milligan, Nebraska on Thursday, March 10, 2011, with Kim Dunker officiating. Music selection were “One More Day” “Go Rest High On That Mountain” and “Grandpa.” Casket bearers were Bryan Kotas, Jeff Kotas, Michael Kotas, Jason Kotas, Kyle Filipi and Cory Filipi. Interment was in the Atlanta Cemetery near Tobias with Farmer & Son Funeral Home-Kotas Chapel in charge of arrangements. Memorials are directed to the family.

Jerome Albert Filipi was born to Albert Filipi and Rosie Zenisek on January 6, 1927 on the family farm near Tobias Nebraska. He passed away on March 5, 2011, at his home near Dorchester, Nebraska at the age of 84 years, 1 month and 27 days.... View Obituary & Service Information

The family of Jerome A. Filipi created this Life Tributes page to make it easy to share your memories.

Send flowers to the Filipi family.