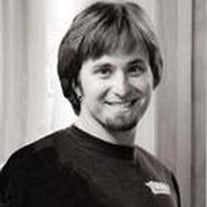 Funeral services for Jerrod will be held on Tuesday, June 17, 2014 at 2:00 p.m. at the United Methodist Church in Geneva. Pastor Ron Harris will officiate the services. Graveside services will follow the funeral and will be held in the Geneva Public Cemetery. Public visitation will be held on Monday from 1:00 p.m. to 8:00 p.m. at the Farmer & Son Funeral Home in Geneva. Memorials are directed to the family to be designated at a later date. Jerrod Andrew Chaney was born to Douglas G. Chaney and Rona L. (Cool) Heltzel on September 9, 1982 in Geneva, Nebraska. He passed away on Tuesday, June 10, 2014 at York, Nebraska at the age of 31 years, 9 months, and 1 day. He was one of two children born in the family. Jerrod grew up around Geneva and graduated from Fillmore Central High School with the class of 2000. Jerrod loved spending his time with family and friends whether it was tinkering on vehicles or motorcycles or just getting together telling stories of the younger years. He also had a love for dogs and shared some of his greatest memories with any of his companions. Jerrod also enjoyed and had a great talent for tractor pulling with his family and making new friends along the way. He had a gift and knowledge of finding hidden potential in any car part or neglected vehicle and found joy bringing them back to life. He treasured everything he had and saw the value in anything he owned. He fell in love with the trucking business just like his father. In December of 2011 he started Chaney Transfer and was very successful at it and made a lot of new friends along the way. He made friends very easily with his outgoing personality, maybe a little sarcasm, and he had a smile that could light up the room. He will be truly missed by all but we will always have the spot in our hearts for Jerrod, along with memories, to carry with us. Jerrod was preceded in death by his paternal grandfather, Richard Chaney; maternal grandfather Harvey Thole; and Aunt Patricia Cool. He is survived by his wife, Aftan of York, Nebraska; father Doug & Jeanine Chaney of Geneva, Nebraska, mother Rona & David Heltzel of York, Nebraska; sister Lacy Cool of McCool Junction, Nebraska; nephew Kolten Cool of McCool Junction, Nebraska; grandmothers Patricia Chaney of Syracuse, Nebraska, Mary Chaney of Geneva, Nebraska, and Mona Thole of McCool Junction, Nebraska; half siblings Jason Smith of Lincoln, Nebraska and Michelle Smith; step siblings Jason Longnecker of Lincoln, Nebraska, Julie Dirkschneider of Howells, Nebraska, Josie Longnecker of Yutan, Nebraska; aunts and uncles Mike & Katie Chaney of Geneva, Nebraska, Denise & Larry Paul of Lincoln, Nebraska, Barry Chaney of Geneva, Nebraska; nieces, nephews and cousins.

Funeral services for Jerrod will be held on Tuesday, June 17, 2014 at 2:00 p.m. at the United Methodist Church in Geneva. Pastor Ron Harris will officiate the services. Graveside services will follow the funeral and will be held in... View Obituary & Service Information

The family of Jerrod A. Chaney created this Life Tributes page to make it easy to share your memories.

Funeral services for Jerrod will be held on Tuesday, June 17,...