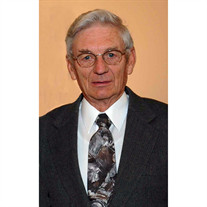 Funeral services for Jerry will be held on Friday, July 31, 2015 at 10:00 a.m. at the Prince Of Peace Lutheran Church in Geneva. Pastor James Sells will officiate the services. Graveside services will be held at the Aurora Cemetery at 2:00 p.m. on Friday. Visitation will be held on Thursday from 1:00 p.m. to 8:00 p.m. at Farmer & Son Funeral Home in Geneva. Memorials are directed to the Geneva Rescue Squad or the Prince Of Peace Lutheran Church. Gerald C. (Jerry) Friesen passed away July 27, 2015, in Geneva, Nebraska, at the age of 86 years, 5 months, 11 days. He was born February 16, 1929, to David P. and Anna (Tessman) Friesen in Henderson, Nebraska. The second of four children, Jerry grew up on a farm south of Hampton and graduated from Hampton High School in 1946. After graduation he farmed until he was drafted into the United States Army in 1951. He completed radar school in Texas and served his country in Japan during the Korean War. Upon his discharge in 1953, he used his radio repair skills at Springer's Appliance in Aurora where he was a TV technician. Later he opened his own business, Jerry's Radio and TV, where he repaired and sold TV's, stereos, and antennas. On April 17, 1954, he married Dolores Driewer of Hampton, and they purchased their home in Aurora where they would raise their family. They were blessed with three children: Randy, Becky, and Beth. Jerry is remembered by his children as a loving father who loved to play with them, and he taught them many things as they worked alongside him. He and Dolores enjoyed attending their children's activities and events. All who knew Jerry knew of his love of fishing, and his 16 Master Angler Awards displayed on the wall in the family’s cabin were proof of his skill. He took every opportunity to fish in local lakes and camp with his family on weekends. In 1970 they purchased their cabin on a sandpit near Hordville. His children and grandchildren spent countless happy hours there learning from Jerry about fishing and the simple things in life. After retirement Jerry enjoyed making things in his woodshop. From doll cradles for the granddaughters to beautiful scroll saw creations, Jerry's family have many treasured items made by his capable hands. His woodshop was also a place for the grandchildren to have fun with grandpa while they made creations of their own. Due to his declining health, Jerry and Dolores sold the house they had lived in for 57 years and moved to Geneva to be closer to family. Through all these changes and poor health, Jerry continued to cherish time with his family. He readily expressed his appreciation for the loving care from his wife through all of the challenges of his declining health. Jerry was preceded in death by his parents; parents-in-law Werner and Ruth Driewer; grandson Chet Deichmann; brothers-in-law Stuart Driewer, Dwain Driewer, Robert Hutsell, and Max Northrop. He is survived by his wife Dolores; son Randy Friesen of Rockport, MO; daughter Becky Deichmann of Central City; daughter Beth Lightwine and husband Mark of Geneva; grandchildren Stephani Francl and husband Chase, Anthony Deichmann and wife Kayla, Kimberly Deichmann, Cody Lightwine and wife Penny, Heidi Farmer and husband Shaun, Kelsey Lightwine, and Tyce Lightwine; great grandchildren Brynley and Kaley Lightwine, Ashlyn and Leah Farmer, Lily and Connor Francl. Also surviving are his brother Max Friesen and wife JoAnn, sisters Lois Northrop and Norma Hutsell, sisters-in-law Cleo Driewer and Jean Driewer, Joyce Ediger and husband Larry; and many nieces and nephews.

Funeral services for Jerry will be held on Friday, July 31, 2015 at 10:00 a.m. at the Prince Of Peace Lutheran Church in Geneva. Pastor James Sells will officiate the services. Graveside services will be held at the Aurora Cemetery at 2:00... View Obituary & Service Information

The family of Jerry Friesen created this Life Tributes page to make it easy to share your memories.

Send flowers to the Friesen family.