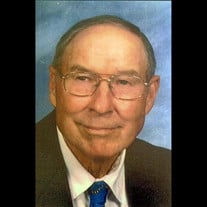 Funeral services for Jess will be held on Monday, January 18, 2016 at 10:30 a.m. at the St. John's Lutheran Church in Ohiowa, Nebraska. Pastor Becky Sells will officiate the service. Military Graveside services will follow the funeral, and they will be held in the Ohiowa Public Cemetery. Visitation will be Sunday from 1:00 p.m. to 8:00 p.m. at Farmer & Son Funeral Home in Geneva. Memorials are directed to the St. John's Lutheran Church or the Ohiowa Rescue Squad. Jess Gustav Schropfer was born to William J. and Marie A. (Tischer) Schropfer on May 27, 1923 on the family farm near Ohiowa NE. He passed away January 14, 2016 at the Fairview Manor in Fairmont NE at the age of 92 years, 7 months and 18 days. Jess attended country school and later Ohiowa High School, where he graduated in 1940. Jess served in the Army Counter Intelligence Corps from February 1, 1946 to April 1947. He was to be trained as a spy, and was stationed in Dundalk, MD. On August 8, 1948, Jess married Georgia Michl. They had four children. Jess farmed near Ohiowa with his brother Louis, and later with his sons Ron and Roger. He served on the Ohiowa school board, and was past president of the board. He was a member of American Legion Post #193 in Ohiowa, and served on the Franklin Township board. He was also a member of St. John’s Lutheran Church in Ohiowa. Jess loved to play baseball. He was the pitcher on the Tobias town team in the 1940’s, and he played in pick-up games with his family his whole life. During a family reunion in July 2015, he had his final at bat at the age of 92. Jess also loved to play cards, and spent many gatherings playing five point pitch with family and friends, Jess was not much of a talker; he just did what was right. He quietly lived his life as an example to those who knew and loved him, and demonstrated by his actions the virtues of hard work, thrift, loyalty and honesty. Jess was preceded in death by his parents, William and Marie Schropfer, and his brother and sister-in-law, Reinhart and Marge Schropfer. He is survived by his wife, Georgia Schropfer, brother and sister-in-law Louis and Darlene Schropfer of Ohiowa, son Duane Schropfer of Geneva, son and daughter-in-law Ron and Georgia Schropfer of Fairmont, daughter and son-in-law Carol and Bill Woodward of Kearney, son and daughter-in-law Roger and Carrie Schropfer of Lincoln, grandchildren Bill Schropfer and his fiancé Amanda Haumont of Fairmont, Ann and Kerry Holmstrom of Omaha, Jon and Dawn Schropfer of Aberdeen MD, Ben and Trina Schropfer of Gretna, Cari and Andres Casas of Albuquerque NM, Eric and Holli Woodward of Lincoln, Amanda Woodward and her fiancé Ben Owen of Sacramento CA, Justin Britton and his fiancé Laura McKinley of Lincoln, Brandon and Amber Hartsock of Lincoln, great-grandchildren Dietra Schropfer, Nate Schropfer, Wyatt and Garrett Hansen, Becka and Linnea Holmstrom, Gus Schropfer, Amber, Sarah, and Rachel Schropfer, Madison Casas, Alaysia, Kaidan and Charlie Britton, Lilly Krusemark, and Penelope Hartsock, numerous nieces, nephews, cousins and friends.

Funeral services for Jess will be held on Monday, January 18, 2016 at 10:30 a.m. at the St. John's Lutheran Church in Ohiowa, Nebraska. Pastor Becky Sells will officiate the service. Military Graveside services will follow the funeral, and... View Obituary & Service Information

The family of Jess G. Schropfer created this Life Tributes page to make it easy to share your memories.

Funeral services for Jess will be held on Monday, January 18,...