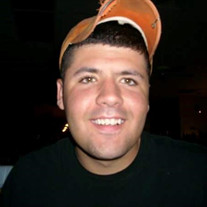 A funeral service for Jesse will be held on Thursday, December 31, 2015 at 10:00 a.m. at the First Congregational United Church of Christ in Geneva. Pastors Eldon & Marybeth Nicholson will officiate the service. Visitation for Jesse will be held on Wednesday from 3:00 p.m. to 8:00 p.m. at the Farmer & Son Funeral Home in Geneva. Interment following the funeral will be held in the Geneva Public Cemetery. Memorials are directed to the family for later designation. Jesse Lee Richards was born on February 11, 1987 in Geneva, Nebraska to Kelly Jo (Richards) Hartman. Jesse tragically died December 20, 2015 in San Antonio TX. Jesse spent most of his younger years on the farm outside of Geneva with his Grandparents Gary and Shelia Richards. Jesse was active in Boy Scouts attaining the rank of Life Scout. He was also active in Church Youth Group and became a member of First Congregational United Church of Christ in Geneva, Nebraska. He graduated from Fillmore Central High School in 2005. In August 2005, Jesse joined the United States Army. After basic training, Jesse was stationed in Schofield Barracks in Hawaii. While stationed there, he was deployed to Iraq for more than one year. After returning to Hawaii, Jesse transferred to Fort Riley in Kansas. While there, he was deployed to Iraq two more times for a total of 3 ½ years fighting for our country. He was discharged in September 2012. A few months after he was discharged, Jesse moved to Georgetown, Texas. Jesse loved music and enjoyed the musical venues in the Austin area. He attended many concerts in Austin and also New Orleans, Dallas and El Paso. He worked at Ennis golf carts in Liberty Hill, Texas for several months and then started attending classes for computer networking at Austin Community College. At the time of his death, he was living in San Antonio, TX and working at Texas Roadhouse. He loved his job there and was looking forward to completing his education. Jesse is survived by his mother Kelly Hartman of York Nebraska; grandparents Gary and Shelia Richards of Georgetown, TX; brothers Michael Hartman and Amy of Friend Nebraska, Damien Hartman of Omaha Nebraska; sister Amber Hartman of York Nebraska; nieces Keira, and Jade; nephews Michael, Colton, Patrick and Dominic; uncles, aunts, cousins and many friends. He was preceded in death by great grandparents Jesse C. and Kathleen Richards; step father Jeff Hartman; and Uncle Dale Rice.

A funeral service for Jesse will be held on Thursday, December 31, 2015 at 10:00 a.m. at the First Congregational United Church of Christ in Geneva. Pastors Eldon & Marybeth Nicholson will officiate the service. Visitation for Jesse will... View Obituary & Service Information

The family of Jesse Lee Richards created this Life Tributes page to make it easy to share your memories.

A funeral service for Jesse will be held on Thursday, December...

Send flowers to the Richards family.