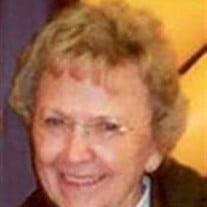 Funeral services will be held 10 a.m., Thursday, June 28, 2012, at the United Methodist Church in Shickley, Nebraska. No public visitation or viewing. Interment will be in the Shickley Public Cemetery with Rev. Dorothy Aspegren officiating. Joan (Rosenquist) Walters was born on December 5, 1932, one mile south of Shickley, Nebraska. She passed away on Monday, June 25, 2012, at the Fairview Manor in Fairmont at the age of 79 years. Joan attended Fairfield school through the 5th grade then the family moved to Geneva. She graduated from Geneva High School in 1951. On July 31, 1954 she married Dick Walters and to them two sons were born Rick and Mike. She was very active in the farming operation until her illness. Dick and Joan lived on the farm until 1991 when they moved to Shickley. They also enjoyed wintering in Texas for many years. Joan was a very devoted wife, mother, and grandmother. She adored her grandchildren and made sure she could attend all of their ballgames and activities. Joan was a member of the Shickley United Methodist Church, Shickley Legion Auxiliary and volunteered for numerous community bloodmobiles. She was a member of the Shickley Community Foundation Building Committee. Joan was preceded in death by her father Dwight Rosenquist, mother Dorothy Serk and stepfather Ray Serk, sister and brother-in-law Patsy and Orville Cromwell and by a brother, Leland Rosenquist Sr. She is survived by her husband Dick, sons Rick and wife Diane Walters, Mike and wife Camella Walters, sister-in-law Mary Ann Rosenquist, grandchildren Spencer, Wade and Whitney Walters all of Shickley, Stesha and husband Zach Schneider and great granddaughter Emery Schneider of Lincoln and many nieces, nephews and cousins.

Funeral services will be held 10 a.m., Thursday, June 28, 2012, at the United Methodist Church in Shickley, Nebraska. No public visitation or viewing. Interment will be in the Shickley Public Cemetery with Rev. Dorothy Aspegren officiating.... View Obituary & Service Information

The family of Joan Walters created this Life Tributes page to make it easy to share your memories.

Send flowers to the Walters family.