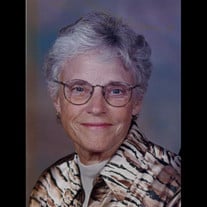 Joanne (Dill) Messman was born to Earl P. and Nelle (Trumble) Dill on June 21, 1931 at Belvidere, Nebraska, and passed away on August 8, 2019, at Blue Valley Lutheran Home in Hebron, Nebraska at the age of 88 years, 1 month, and 18 days. She was one of 6 children in the family. Joanne, along with her five siblings, grew up on the family farm outside of Belvidere. She attended country school through grade school and graduated from Belvidere High School with the class of 1949. After high school, she attended the University of Nebraska School of Nursing, graduating in 1952. After raising her children, she went back to school in her 50’s taking correspondence courses and completing her Bachelor’s Degree in Nursing. On June 8, 1954 she was married to Duane Messman of Bruning, Nebraska. Three children were born to this union: Dave, Monte, and Ellen. They made their home in Bruning, where Duane had established Messman Fertilizer in 1964. Joanne worked for many years at the Hebron Hospital, Dr. R.E. Penry's Medical Office and at the Blue Valley Lutheran Home. She also assisted in the family fertilizer business keeping the books from 1964 to 2013. Joanne and Duane celebrated their 65th anniversary this past June. Joanne was a member of the Bruning United Methodist Church serving as treasurer, pianist, and a member of the United Methodist Women. She was also a member of the Legion Auxiliary, 4-H leader, bridge club member, and played women’s softball into her 40’s. Joanne was the first woman to serve on the Bruning Public School Board in 1972 and was also re-elected to several more terms. Joanne enjoyed traveling and took several trips with her sisters and family to places including China, France, Egypt, South America where she floated down the Amazon River, Mexico, and Canada. She also enjoyed quilting, canning, and freezing her produce from her garden. Her family was always the center of her priorities and she was actively involved with them attending their sporting events, music concerts, and school activities. In her later years, she enjoyed following her grandchildren in their activities, even travelling out of state to follow them. Joanne was preceded in death by her parents Earl & Nelle Dill and brothers Jack Dill and Robert Dill. She is survived by her husband Duane of Bruning; sons and daughter-in-law David Messman of Bruning and Monte & Lynn Messman of Scottsdale, Arizona; daughter and son-in-law Ellen & David Garrett of Kansas City, Missouri; grandchildren Zachary Messman and wife Lindsey of Bruning, Nebraska; Zoey Messman of Omaha, Nebraska; Lauren Messman of Brooklyn, New York, Connor Messman of Scottsdale, Arizona, Allison Garrett and Jackson Garrett both of Kansas City, Missouri; great grandchildren Grayson Messman and Ryann Messman both of Bruning, Nebraska; sisters Jean Anderson and Carol Lehmkuhl both of Georgetown, Texas, Barbara & Dick Beechner of Kearney, Nebraska; and sister-in-law Arlys Dill of Hebron, Nebraska; nieces, nephews, and friends. A Memorial Service for Joanne was held on Monday, August 12, 2019 at 10:00 a.m. at the Bruning United Methodist Church in Bruning, Nebraska. Kim Dunker officiated the service. Janice Fintel accompanied the congregation in the singing of “Amazing Grace,” “It Is Well With my Soul,” and “In The Garden.” Honorary Pallbearers for the service included Joanne’s grandchildren: Zach Messman, Zoey Messman, Lauren Messman, Connor Messman, Allison Garrett, and Jackson Garrett. Inurnment was held in the Bruning Public Cemetery following the Memorial Service. Farmer & Son Funeral Home was in care of the arrangements and online condolences can be left at www.farmerandsonfuneralhome.com. Memorials are suggested to the Bruning Community Foundation in care of the Kinder Academy.

Joanne (Dill) Messman was born to Earl P. and Nelle (Trumble) Dill on June 21, 1931 at Belvidere, Nebraska, and passed away on August 8, 2019, at Blue Valley Lutheran Home in Hebron, Nebraska at the age of 88 years, 1 month, and 18 days. She... View Obituary & Service Information

The family of Joanne Messman created this Life Tributes page to make it easy to share your memories.

Send flowers to the Messman family.