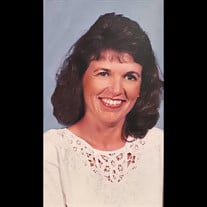 Marla Jo Heinrichs aka Jody, Jo, Mom, Grandma, Aunt Jody and Toad blessed this world on October 18, 1956 when the last load of turkeys were shipped out from the Kempf farm. She was born to Rowen & Lila (Hendrickson) Kempf of Shickley, Nebraska and was welcomed home by 2 older, protective brothers, Michael & Mark. She left this world on March 22, 2021 at her home near Shickley, Nebraska, surrounded by her family, at the age of 64 years, 5 months and 4 days. Jody grew up on a farm outside of Shickley where she was no stranger to working hard alongside her father and brothers. She always lived by the saying ‘you work hard and play just as hard or maybe a little more!’ She lived this way in her youth and as well in her adulthood. It was her 8th grade year that an implant from Bruning transferred to Shickley and at the Hastings Melody Roundup he put his gloves in the hood of her coat, forgetting them so she would have to come find him to return them. This was the start of Hank and Toad. Jody graduated from Shickley High School in 1975 and went to Lincoln to complete her Medical Assistant Degree. Jody and Steve were united in marriage on Mary 28, 1977. They moved to the farm in 1979 and began their journey with farming. It was their teamwork and dream to start building a legacy to be passed on to future generations. On September 28, 1982, they were blessed with their first child, Haylee Jo. Ornery middle child, Mallory Loretta came on December 30, 1985. Then at a farm show after Dad fed Mom beer and ice cream and 40 weeks later, Gregory Steven finished the family on November 19, 1987. In December of 1992, Jody made Steve purchase a cabin at Lovewell Lake. This is where the family spent many long weekends and late nights alongside many family and friends. The Lake Bunch became a 2nd family and it was a tradition every year to hold a reunion on the 1st weekend in August which consisted of Margarita Saturday and Ice Tea Sunday. Hank & Toad enjoyed the following years farming , raising their ‘rugrats’ and taking vacations. One spot that will forever hold a special place in their hearts is Key West in Florida. On August 29, 2006, their first grandchild was born, Ella Jo. Jody found a whole new level of love which just kept growing with each grandchild. Luke Loretta was next to join in 2008, Crosbe Steven in 2009, Graeme Gregory in 2013, Koy Theil in 2014, Lenni Jo in 2015, Kade Theil in 2017, Greta Rose in 2018, Nora Jo in 2021 and Ty Shaw rounded out the pack of grandchildren. Jody loved her family and family was everything. Family sticks together no matter what, and that’s all she ever asked for and wanted. Jody was preceded in death by her father, Rowen Kempf; brother Michael Kempf; grandparents Jay & Fauna Kempf and Joseph & Edith Hendrickson; and granddaughter Faith Heinrichs. Jody is survived by her soulmate, Steve Heinrichs of Shickley, Nebraska; daughters Haylee Williams of Hebron, Nebraska, Mallory (Knud) Elting of Carleton, Nebraska; son Gregory (Tami) Heinrichs of Clay Center, Nebraska; grandchildren: Ella, Crosbe, and Graeme Williams of Hebron, Nebraska, Luke, Koy, and Kade Elting of Carleton, Nebraska, Lenni, Greta, and Nora Heinrichs of Clay Center, Nebraska, and Ty Shaw of Lincoln, Nebraska; mother Lila Kempf of Shickley, Nebraska; father and mother-in-law Lyle and Frances Heinrichs of Shickley, Nebraska; brother Mark (Janet) Kempf of Shickley, Nebraska; nieces and nephews Mikaela Eitzmann of Shickley, Nebraska, Danielle (Doyle) Horwart of Burnsville, Minnesota, Jesse (Tanya) Kempf, Jered (Miranda) Kempf, Cody (Shaylee) Kempf all of Shickley, Nebraska, Wendy (Mark) Vanskiver of Hebron, Nebraska and Libby (Jeremy) Heitmann of Byron, Nebraska; as well as many great nieces and nephews and host of friends and the Lovewell Lake OGs. A Memorial Service for Jody was held on Saturday, March 27, 2021 at 10:30 a.m. at the Zion Lutheran Church in Carleton, Nebraska. Pastor Beth Roegner officiated the Memorial Service. Ashten Smith played the guitar and sang "Amazing Grace" and "Hallelujah" during the service. Honorary pallbearers were Jody's grandchildren. A Private family Graveside Service will take place at the Carleton City Cemetery at a later date. Farmer & Son Funeral Home was in care of the arrangements and online condolences can be left at www.farmerandsonfuneralhome.com Memorials are suggested to the Fillmore County Hospital Foundation or the Buffett Cancer Center at UNMC.

Marla Jo Heinrichs aka Jody, Jo, Mom, Grandma, Aunt Jody and Toad blessed this world on October 18, 1956 when the last load of turkeys were shipped out from the Kempf farm. She was born to Rowen & Lila (Hendrickson) Kempf of Shickley, Nebraska... View Obituary & Service Information

The family of Jody Heinrichs created this Life Tributes page to make it easy to share your memories.