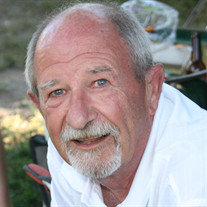 Mass of Christian Burial will be held on Sunday, January 24, 2016 at 5:00 PM at St. Joseph's Catholic Church in Geneva, NE with Father Tom Walsh officiating. Rosary will be held on Saturday, January 23, 2016 at Farmer & Son Funeral Home in Geneva, starting at 7:00 PM. Visitation for John will be Saturday, January 23, 2016 at Farmer & Son Funeral Home in Geneva, starting at 1:00 PM and going until the start of the rosary at 7:00 PM. Graveside services are going to be held at a later date. Memorials are to be directed to the family for a later designation. John William Babik was born one of five children to John Steven and Helen Dorothy (Popovich) Babik on February 27, 1946 in Youngstown, Ohio. He passed away on January 20 at Fillmore County Hospital in Geneva, Nebraska at 69 years of age. John attended St. Matthias Catholic elementary school and Woodrow Wilson High School where he achieved many honors. He was a member of Woodrow Wilson's 1964 District Basketball Championship team, lettered in track and cross country, was vice-president of the Key Club, a community service organization and Varsity "W" club treasurer and was a member of the Slovak Catholic Sokols. John made his home in Colorado for thirty years where he was Vice President of Product Support for Power Equipment Company. John was preceded in death by his parents, John and Helen Babik, a brother, James Babik and sister Barbara (Babik) Trevis. He is survived by his wife Dyana Rose (Clow) Babik, whom he married November 24, 1979 and their two daughters Kristin Babik (significant other Jason Nieznay) of Cypress, TX and Kati Babik (fiancé Thomas Jones) of Geneva, NE, daughter Lisa Berman of Laguna, CA, son Jared (Caroline) Babik of Pittsburgh, PA, stepson Damian (Angi) Baynes of Phoenix, AZ, brother Gene Babik of Youngstown, OH, sister Evelyn Babik of Struthers, OH and grandchildren Chiara Lisette Berman-Yuhas and Hunter Grace Babik-Nieznay.

The family of John William Babik created this Life Tributes page to make it easy to share your memories.

Mass of Christian Burial will be held on Sunday, January 24,...

Send flowers to the Babik family.