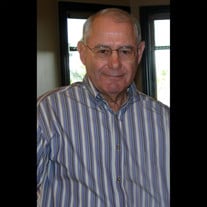 John Power was born June 11, 1940, in Grand Island, Nebraska, to Tracil and Nella Power. He died peacefully at his home May 1, 2021, at the age of 80 years. He was the youngest of 6 children. His life was spent in the Gibbon, Nebraska , area until he graduated from Gibbon High School in 1958. He then attended the University of Nebraska, where he was a member of the Alpha Tau Omega fraternity. Upon graduation with a business degree, he joined the US Navy and attended Officer Candidate School in Newport, Rhode Island. He and his wife, Nancy, began their military experience in Athens, Georgia where he attended the Naval Supply School. The remainder of his military career was spent stationed out of San Diego, California with deployments on an attack transport to Vietnam. He and Nancy returned to Nebraska after John’s stint in the Navy. They raised three daughters. It was their desire and decision to live in beautiful Nebraska for the remainder of their married lives. John enjoyed his career as an Independent Insurance Agent in Buffalo County before relocating to Geneva. He continued insurance work at New Frontier Insurance. He was active in the United Methodist Church, Lions Club, Arbor Foundation, and American Legion. John spent many years announcing sporting events for the Gibbon Buffaloes and Geneva Wildcats/Panthers. He was an avid Husker fan, birder, golfer, beer brewer, traveler, and loved planting and nurturing trees. His favorite past-time was playing bridge and beating his wife at cribbage. He was meticulous in grooming his lawn and landscape. It was a source of pride to watch his daughters participate in sporting events, and icing on the cake was traveling to Lawrence, Kansas where he was a spectator at his grandson’s KU track meets. For 30 years on Sundays you could find him singing in the UMC choir standing right beside his special friend Ray Nichols. John was preceded in death by his parents, his brothers Ron, Leroy, Royal, and a twin sister, Jane Wiles. He is survived by his wife of 57 years, Nancy (Mercer), daughters Becky Atkinson (husband Dennis), Carrie Power, and Libby Power-Leybman (husband Gary), grandson Braden Kleinschmidt, sister LaBerta Olson, and many nieces and nephews. A Memorial Service for John was held on Friday, May 7, 2021 at 11:00 a.m. at the United Methodist Church in Geneva, Nebraska. Pastor Doug Griger officiated the Funeral Service. Ben & Sam Rickert provided special music and they sang “Precious Lord, Take My Hand” and “It Is Well With My Soul.” Special video music “Tree” by The Platters was also played during the service. Military Honors were held outside the Methodist Church following the Memorial Service. They were performed by the Samuel J. Marsh Geneva VFW 7102, Geneva American Legion Sloan-Bolton Post 68, Sons Of The American Legion, and the Navy Honor Guard. A private Committal Of Ashes was held on Monday, May 10, 2021 at the Omaha National Cemetery in Omaha, Nebraska. Farmer & Son Funeral Home was in care of the arrangements and online condolences can be left at www.farmerandsonfuneralhome.com Memorials are suggested to the United Methodist Church in Geneva.

John Power was born June 11, 1940, in Grand Island, Nebraska, to Tracil and Nella Power. He died peacefully at his home May 1, 2021, at the age of 80 years. He was the youngest of 6 children. His life was spent in... View Obituary & Service Information

The family of John A. Power created this Life Tributes page to make it easy to share your memories.

Send flowers to the Power family.