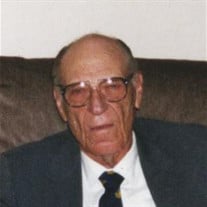 Funeral services will be conducted from the St. Joseph's Catholic Church in Geneva on Tuesday, March 17, 2015 at 10:30 AM with Father Tom Walsh officiating. Prior to the funeral service there will be a rosary held at 10:00 AM at St. Joseph's Catholic church on Tuesday, March 17th. Visitation will begin on Monday, March 16, 2015 at Farmer & Son Funeral Home in Geneva from 1:00 PM to 8:00 PM. Graveside services will be held at St. Joseph's Catholic Cemetery. Memorials are to be directed to the St. Joseph's Catholic Church. Johnny Stengel was born January 6, 1918 in rural Clay County, Nebraska, and died March 14, 2015 in Geneva, Nebraska. Johnny lived much of his life in a rural setting and always had a special place in his heart for the family farmstead, situated on the Clay and Fillmore County line. After growing up on the farm, he grew to have a special fondness for horses. He always had his own horse as a young man, and one of his favorite pastimes as an adult was “playing the ponies.” Much of his adult leisure time was spent at the finish line while at Fonner Park, the Lincoln Fairgrounds, and Omaha’s historic Aksarben racetrack. After many years on the farm, Johnny spent more than 40 years “in town” in Geneva, Nebraska, where he lived with his brother, Charlie, much of that time. His house, which sits on a large lot at the corner of 8th and D streets in Geneva, was a familiar place to his friends and relatives who visited. Johnny was a staunch supporter of his favorite politicians, John F. Kennedy, as well as Bill and Hillary Clinton. He was also a devout Catholic who was always at mass and very generous to St. Joseph’s Catholic Church in Geneva. Living within shouting distance of St. Joseph’s, Johnny could walk to mass on Saturday night after the church rebuilt at its present location. Even when Johnny was laid up while recuperating from hip surgery, he always made it a priority to attend mass, either in person, or “on TV.” After living through the Roaring 20’s and also the “Great Depression,” Johnny learned to become very self-sufficient and independent, and remained so until the day he met God face-to-face. Uncle Johnny always stressed the importance of healthy habits to all would listen. He preached often about the benefits of healthy foods and exercise, including his daily walk at 2:30 AM, vegetable smoothies, and daily garlic pills. These habits and many friends contributed to Johnny’s longevity. Another of Johnny’s favorite pastimes was travelling to Las Vegas with his closest friends. When he approached the registration desk for check-in, they always knew Johnny Stengel and crew at the Four Queens Hotel in Vegas. Johnny spent the last few years closer to home, taking fewer trips to Fonner Park, but much more time in conversation with his niece Janet Bartak, and nephews Richard Mueller, Dale Stengel and Gerry Stengel. Just last year, Johnny’s surviving sister, Deloris Stengel, moved to Geneva and was able to spend more time with Johnny in the last months of a long and wonderful life. Johnny will always be remembered as generous, loyal, humorous, dedicated, loving, and heartfelt. He will be remembered as brother, uncle, great uncle, cousin, and most of all, friend. We love you Johnny, and we’ll miss you.

Funeral services will be conducted from the St. Joseph's Catholic Church in Geneva on Tuesday, March 17, 2015 at 10:30 AM with Father Tom Walsh officiating. Prior to the funeral service there will be a rosary held at 10:00 AM at St. Joseph's... View Obituary & Service Information

The family of John F. Stengel created this Life Tributes page to make it easy to share your memories.

Funeral services will be conducted from the St. Joseph&#39;s Catholic...

Send flowers to the Stengel family.