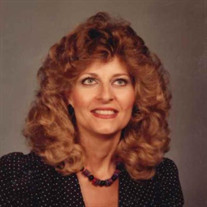 A Memorial Service for Jolene will be held on Friday, February 25, 2022 at 10:30 a.m. at Farmer & Son Funeral Home in Geneva, Nebraska with Pastor Jeff Jensen presiding. No visitation - cremation. Private Family Graveside Services will be held at a later date. Memorials are to be directed to the family to be designated at a later date. Jolene Elaine Whitehead, 71 of Geneva, passed away on Thursday, February 3, 2022 at Heritage Crossing in Geneva, Nebraska. She was born on December 14, 1950 to Charles and Nadine (Klein) Boyes in Hastings, Nebraska. She was one of five children. As a young kid, Jolene lived in Hampton, Neb. and in Geneva, Neb. on a farm south of town where she helped her parents take care of the cows and chickens that they had on the farm. In 1963, the family moved to Syracuse, Nebraska. This is where she finished her schooling and graduated from Syracuse High School in 1969. In that same year, she attended Joseph’s College of Beauty in Lincoln, Nebraska. Jolene later moved to Geneva and started working at the nursing home styling hair for the ladies that lived there until she developed arthritis and had to give it up. Jolene was married and divorced. Out of that marriage two kids were born. The first one was on September 15,1973 her daughter, Misty Jo (Whitehead) Adams. Then on July 21, 1976 her son, Brandon James Whitehead, was born. Jolene loved being a mom to her kids. When they got older, she went back to work at F and M Drug Store. She worked there until the doors closed. After that, she worked different jobs, one of them being at Jill’s Sweet Shop. Jolene quit working there when she became a grandma to three grandkids, Jordan and Carson Adams and Elizabeth Campbell. She got to take care of them. When you talked with her, she would say, “Those are my pride and joy.” Jolene had hobbies that she took up. The first one was spending as much time as she could watching her grandsons play sports. She also loved to scrapbook all the pictures she took of her grandkids. The last hobby was making jewelry until her eyes got bad for her to see to make them. Jolene had many health issues develop over time. One of those issues was breast cancer, and she was a survivor of that. After that, Jolene went to live at Heritage Crossing in the summer of 2017 and was there until her passing. Jolene is survived by her kids, Misty (Sam) Adams of Geneva, Neb., Brandon Whitehead (girlfriend Beth) of Hastings, Neb., 2 brothers: Bill Boyes of Enid, OK., Gary Boyes of Lincoln, Neb., 1 sister, Patty Pitner, of Lincoln Neb. 3 grandchildren Jordan Adams and Carson Adams of Geneva, Neb. and Elizabeth Campbell of Hastings, Neb.: 1 great grandchild, 7 nieces, and 2 nephews. An aunt, Janet Schnunkwiler, of Grand Island, Neb. and also numerous cousins. She is preceded in death by her parents, Charles and Nadine Boyes, a sister, Pam Schmersal, brother-in-law, Mark Pitner and several aunts and uncles along with her grandparents.

A Memorial Service for Jolene will be held on Friday, February 25, 2022 at 10:30 a.m. at Farmer & Son Funeral Home in Geneva, Nebraska with Pastor Jeff Jensen presiding. No visitation - cremation. Private Family Graveside Services will be... View Obituary & Service Information

The family of Jolene E. Whitehead created this Life Tributes page to make it easy to share your memories.

A Memorial Service for Jolene will be held on Friday, February...

Send flowers to the Whitehead family.