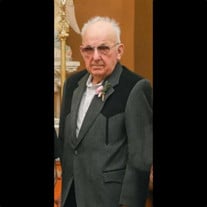 Joseph A. Baxa Jr was born at Tobias, Nebraska to Joseph A. Sr. and Lydia(Lorenz) Baxa on October 19, 1929. He passed away on October 16, 2021 at Heritage Crossings in Geneva, Nebraska at the age of 91 years, 11 months, and 28 days. Joe attended Palmer Country School District #30. He then attended Tobias High School where he graduated in 1947. After high school Joe entered the Navy on January 16, 1951 and was stationed at Pensacola, Florida. He was honorably discharged on December 2, 1954 and then returned home and began farming. On June 12, 1956 he was united in marriage to Eleanor Benes at St. Mary’s Cathedral in Lincoln, Nebraska. To this union three sons were born. They made their home on a farm northeast of Tobias where they lived until they moved to Tobias, Nebraska in 1999. They then moved to Heritage Crossings in Geneva in 2019. Joe was a lifetime member of the American Legion Post #311 of Tobias where he served as a member of the color guard for many years. He was an active member of the St. Joseph Catholic Church in Tobias all his life. He also served on the Meridian School Board for 12 years. Joe was the President of the school board during the construction of the new Meridian Public School in 1976. Joe was a substitute mail carrier for several years, and then became a full-time carrier in 1986 when the boys took over the farming operation. He was a full-time mail carrier for 14 years until he retired in 2000. After retiring, Joe enjoyed working around his yard and helping Eleanor with the garden, windshield farming and helping shuttle the boys when needed. He always enjoyed seeing the updates the boys made to their farm equipment throughout the years. He also liked taking his pontoon boat out, enjoying having his grandkids join him. Joe was preceded in death by his parents Joseph and Lydia(Lorenz) Baxa; son and daughter- in- law Ronald and Janet Baxa; brother and sister in law Leonard and Marvel Baxa; sister and brother in law Dorothy and Irvin Dobesh; in-laws Ernest and Lillian Benes, Paul and Helen Benes, Robert Benes, Daniel Benes, Jerome Benes, Raymond and Frances Hottovy, and Margaret Kouma. Joe is survived by his wife of 65 years Eleanor Baxa; sons William Baxa of Tobias, Gary (Michelle) Baxa of Tobias; grandchildren Brian (Snehal) Baxa of Topeka, Kansas, Greg (Roxy) Baxa of Topeka, Kansas, Miranda (Brent) of Tobias, Melanie (Alex) Clark of McCool Junction, Katelin Sturdivant of Beatrice; great grandchildren Paislee, Kaylee, and Gabby Baxa, Brixton and Bowen Jansky, and Brooks Clark; brother-in- law Arnold Kouma and sister-in-law Dorothy Benes; and many nephews and nieces. A Funeral Mass for Joe was held on Wednesday, October 20, 2021 at 10:00 a.m. at St. Joseph Catholic Church in Tobias, Nebraska. Father Robert Barnhill presided over the Mass. Judy Rada accompanied the congregation in the singing of "Amazing Grace," "Be Not Afraid," "One Bread, One Body," and "How Great Thou Art." A Rosary led by Father Robert Barnhill was prayed on Tuesday, October 19, 2021 at 7:00 p.m. at Farmer & Son Funeral Home - Kotas Chapel in Milligan. Pallbearers for the service included Tom Dobesh, Steve Baxa, Duane Benes, John Baxa, Joe Kouma, and Jim Hottovy. A Graveside Service with Military Honors was held in the Tobias City Cemetery with Military Honors provided by the Tobias American Legion and the U.S. Navy Honor Guard. Farmer & Son Funeral Home was in care of the arrangements and online condolences can be left at www.farmerandsonfuneralhome.com Memorials are suggested to the Tobias American Legion.

Joseph A. Baxa Jr was born at Tobias, Nebraska to Joseph A. Sr. and Lydia(Lorenz) Baxa on October 19, 1929. He passed away on October 16, 2021 at Heritage Crossings in Geneva, Nebraska at the age of 91 years, 11 months, and 28 days. Joe attended... View Obituary & Service Information

The family of Joseph A. Baxa Jr. created this Life Tributes page to make it easy to share your memories.

Joseph A. Baxa Jr was born at Tobias, Nebraska to Joseph A. Sr....