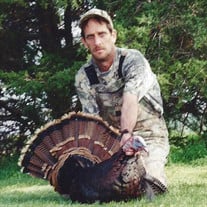 A Memorial Service for Joe will be held on Saturday, June 10, 2017 at 2:00 p.m. at the Farmer & Son Funeral Home in Geneva. Pastor Jason Briggs will officiate the service. Memorials are directed to the family. Joseph Lee Elznic was born to Donald J. Elznic Sr. and Lois Klein Elznic on January 20, 1964 in Geneva NE, and passed away peacefully at his home on June 5, 2017 at the age of 53 years, 4 months, and 17 days. Joe was the youngest of four children in the family. He was baptized at the Hope Reform Church in Sutton. After attending Geneva High School, he worked for Biba Engineering, Werner Construction, Ipsco and Reinke. These last 12 years he had been employed with Bruning Grain & Feed. He took great pride in the fact that he had never missed a day of work in all those years until his recent illness. He had been recently diagnosed with rare form of spinal cord cancer and fought a short, but courageous battle. On December 9, 1992, he married Karleen Holzten of Bruning. One son, Patrick Joseph was born to this union. They later divorced. Joe enjoyed the simple pleasures of life like fishing and hunting, but most of all he liked spending time with his family and friends. He was also a great animal lover and took great pride in his German Short Hair dog, Snoopy. They could be seen together almost everywhere and were known far and wide from York to Bruning. After Snoopy’s passing, he found another companion with his English Springer rescue dog, Sadie Sue. His friendliness and compassion for others will be greatly missed. Joe had also served as a volunteer with the Bruning Fire Department. He is survived by his son, Patrick and fiancee’ Ashley of Exeter; his sister, Karla (Frank) Slezak of Phillips; his brother, Donald Jr (Debra) Elznic of Keiser OR; nephews, Jason Elznic, of Bruning; Tyler Elznic of Keiser OR; nieces Jodi (Dustin) Suminski of Grand Island; Kelly (Nate) Kastens of Grand Island; and Sarah Storey of Keiser OR; and several great nieces and nephews, and many friends. He was preceded in death by his parents, Donald & Lois Elznic; grandparents, James & Agnes Elznic; John & Vera Hofmann, Karl Klein; brother Tim Elznic; and many aunts and uncles.

A Memorial Service for Joe will be held on Saturday, June 10, 2017 at 2:00 p.m. at the Farmer & Son Funeral Home in Geneva. Pastor Jason Briggs will officiate the service. Memorials are directed to the family. Joseph Lee Elznic was... View Obituary & Service Information

The family of Joseph "Joe" Lee Elznic created this Life Tributes page to make it easy to share your memories.

A Memorial Service for Joe will be held on Saturday, June 10,...

Send flowers to the Elznic family.