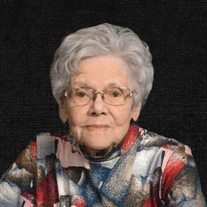 A Memorial Service for Jo will be held on Tuesday, August 3, 2021 at 10:30 a.m. at the United Methodist Church in Geneva, Nebraska with Pastor Doug Griger presiding. It was Jo's wish to be cremated. A Book Signing will be held Monday, August 2, 2021 from 4:00 p.m. until 8:00 p.m. with family present from 5:00 p.m. until 7:00 p.m. at Farmer & Son Funeral Home in Geneva, Nebraska. A Private Family Inurnment will be held on Tuesday, August 3, 2021 at the Spring Creek Cemetery in Ruskin, Nebraska. In Lieu of Flowers - Memorials are to be directed to the UMCOR (United Methodist Committee on Relief). Josephine Odessa Renken was the daughter of Ray and Mary (Phillips) Andres, born November 30, 1924 in Bostwick, Nebraska and passed away on Wednesday, July 21, 2021 in Geneva, Nebraska at the age of 96 years. Jo was one of 9 children in the family. Her siblings are Myrtle Meyers, Ralph Andres, Alverta Baylie, Blanche Jensen, Albert Andres, Beulah Otte, Virginia Landkamer. and Eunice Ells. She married Everett LeRoy Renken on February 5, 1944 and to this union 4 children were born, Gaylord, Sandra, Michael and Rodney. Jo followed Everett from coast to coast during his World War II service in the United States Navy. Worked on both coasts while waiting on him. At the end of the war they moved to Hebron, Nebraska where children Gaylord, Sandra and Michael were born. In 1950, they moved to Geneva for work where Rodney was born. She was the best mother and home manager and helped run a home where decisions and discipline were handed out evenly by both mom and dad. Jo helped Everett in his hobby of remodeling houses and was generally the layout designer and quite competent assistant. She worked as bookkeeper for Doud-Faimon Pharmacy for years. Jo’s children remember traveling with their parents. Always in a car and usually on what became known as the most “squiggly” road on the map. She would frequently choose two different routes to and from a location because she wanted to see something new. Jo would also choose to go any other route than an Interstate and in fact hung a map on their patio marked with every road they had traveled in the United States. They traveled many as they delivered trailers for a few years. Her goal as her grandchildren became adults was to visit each of their homes around the country even if they moved from one location to another. She loved her grandchildren and she loved to travel. Her most recent trip was just two years ago to visit a granddaughter in Florida and a grandson in Georgia in the same trip. She would choose to travel whenever the opportunity arose. She served in numerous positions at the United Methodist Church in Geneva. If something needed to be done, she would volunteer to do it and make sure it was done correctly. She was active in the hospital auxiliary, which she enjoyed greatly. She was very fond of her prayer shawls which had warm and countless hearts woven in them. Jo is survived by her children; Sandra (Darrel) Hoffman, Michael (Sue) Renken, Rodney (Sandra) Renken, grandchildren; Stacy Hoffman, Katie Hoffman, Sam Renken (Maggie), Mary Uher (Jason), Meghan Wilke (Clint), Alisha Renken, Ryan Renken, great grandchildren; Jeremiah and Addison Renken, Ryden Renken, Zuri, Ella, and Indie Renken, Reese, Macy and Thor Wilke, sisters; Virginia Landkamer and Beulah (Billy) Otte and numerous nieces and nephews. She is preceded in death by her husband, Everett, son, Gaylord, parents, Mary and Ray Andres, and siblings, Myrtle, Alverta, Blanche, Albert, Ralph, and Eunice.

A Memorial Service for Jo will be held on Tuesday, August 3, 2021 at 10:30 a.m. at the United Methodist Church in Geneva, Nebraska with Pastor Doug Griger presiding. It was Jo's wish to be cremated. A Book Signing will be held Monday, August... View Obituary & Service Information

The family of Josephine "Jo" Renken created this Life Tributes page to make it easy to share your memories.

A Memorial Service for Jo will be held on Tuesday, August 3,...

Send flowers to the Renken family.