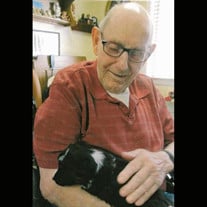 Joy Leland Miller was born on March 3, 1922 at Shickley, Nebraska to Melvin F. & Ora B. (Horner) Miller. He passed away August 28, 2020 at Heritage Crossings in Geneva, Nebraska at the age of 98 years, 5 months, and 25 days. Joy attended country school at District 51 in Fillmore County, Nebraska, finishing the 8th grade. He resided with his mother, brothers, and niece for many years on the farm near Shickley, Nebraska. He worked as a farm hand, both on the family farm and for others in the area. In approximately 1982, the brothers and niece moved to Geneva where they lived for many years. Joy enjoyed working in the yard and taking care of his tools as his father taught him. He loved to visit with people, always willing to tell stories. He could frequently be seen riding his three wheeled bicycle around town. In February 2007, Joy became a resident of Heritage Crossings. Joy quickly adapted to the nursing home. He loved to tell many stories about his life on the farm, horses which he loved, growing watermelons and about life working for many of his relatives. Joy loved to share his personal items (a picture or an object) with staff and other residents. He would go to the offices of staff members just to see how they were doing and to show them any items he might have or just to look at something out the window. Joy was involved in many of the activities at Heritage Crossings and he loved to go on outings with the nursing home residents and staff. He was very proud of being crowned king for Valentine royalty. Joy was a good and kind hearted man with an innocent spirit and a simple faith. He went to church faithfully at the Nursing Home. Joy was preceded in death by his parents, Melvin & Ora; infant sister, Vera; brothers, Glenn, Melvin (Ellsworth), and Vern Miller; and a niece, Melinda Miller. He is survived by many cousins and the Heritage Crossings family. A Funeral Service for Joy was held on Thursday, September 3, 2020 at 10:00 a.m. at Farmer & Son Funeral Home in Geneva. Pastor Mike Row officiated the Funeral Service. The recorded selections “How Great Thou Art,” “Amazing Grace,” and “The Old Rugged Cross” were played during the Funeral Service. Pallbearers for the service included Doug Dowdy, Jim Cunningham, Jim Conway, Shaun Farmer & Kevin Perrien. Interment was held in the Bethel Cemetery following the Funeral Service. Farmer & Son Funeral Home was in care of the arrangements and online condolences can be left at www.farmerandsonfuneralhome.com Memorials are suggested to the Bethel Cemete

Joy Leland Miller was born on March 3, 1922 at Shickley, Nebraska to Melvin F. & Ora B. (Horner) Miller. He passed away August 28, 2020 at Heritage Crossings in Geneva, Nebraska at the age of 98 years, 5 months, and 25 days. Joy attended... View Obituary & Service Information

The family of Joy L. Miller created this Life Tributes page to make it easy to share your memories.