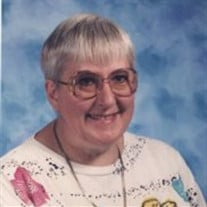 Joyce Sue Johnson Boyes was born to Keith Raymond Johnson and Gladys Dorothea Johannes Johnson on June 8th, 1951 in Superior, Nebraska and passed away August 18th, 2014 at Fillmore County Hospital in Geneva, Nebraska at the age of 63 years 2 months, 10 days. She was one of four children in the family. She attended and eventually graduated from Chester High School in 1969, went on to attend Concordia Teachers College, where she graduated in 1973, and moved to Deshler, Nebraska where she began her teaching career at Deshler Lutheran School in 1974. In 1974, she married the love of her life, Robert Dean Boyes in Chester, Nebraska at St. John’s Lutheran Church. From this marriage came three children, Chad (1975), Nick (1978) and Kyle (1987). The couple resided in Deshler for three years with Joyce teaching at Deshler Lutheran School before moving to Geneva. Joyce worked many jobs while in Geneva including librarian, public school para-educator for both Geneva Public Schools and Strang Public Schools, care giver to Mark Miller and personal tutor for Sarah Nun, her “little angel.” Joyce was a member of St. Peter Lutheran Church in Deshler and then upon moving to Geneva, joined the Prince of Peace Lutheran Church. She lent many of her talents to the church by teaching Sunday school, Vacation Bible School and even using her musical gifts with the children teaching them songs such as “This Little Light of Mine.” In 2004, Joyce found her true calling on this earth, being a Grandmother. Her only Granddaughter, Abigail, born to Chad and his wife Nicki, was her pride and joy. Abby and her “Nana” laughed a lot, shared a love of playing the piano, and LOVED America’s Funniest Home Videos. Getting good grades in school was something Nana always held Abby accountable to. Nana Boyes would often come and spend a week at a time with Abby. The times they shared will forever be special to both of them. Joyce is survived by her husband, Robert Boyes of Geneva; her three sons, Chad and his wife Nichole and their daughter Abigail of Bennington, Nebraska; Nick of Omaha, Nebraska; and Kyle of Geneva, Nebraska; sister, Janet Ritterling of Lincoln, Nebraska; Brother, Jerry Johnson and his wife Pam of Shawnee, Kansas; and many nieces, nephews, and cousins. She was preceded in death by her Parents, Keith and Gladys Johnson, her brother James Johnson, and brother-in-law Raymond Ritterling. Funeral services will be conducted at 10:30 a.m. Friday, August 22nd, 2014 at Prince of Peace Lutheran Church and Joyce will be placed in her final resting place at Geneva Public Cemetery. She will be waiting to welcome each of us as we enter the kingdom of God. Visitation will begin Thursday, at 1 p.m. until 8 p.m. with family greeting friends from 6 to 8 at the Farmer & Son Funeral Home in Geneva, Nebraska Memorials are directed to the family.

The family of Joyce S. Boyes created this Life Tributes page to make it easy to share your memories.

Send flowers to the Boyes family.