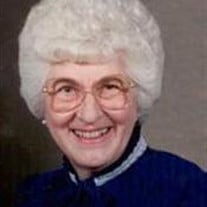 Joyce Arvene (Kraft) Wattles was born to Albert M. and Olga (Nitz) Kraft, March 15, 1923, on a farm near Louisville (Cass County), Nebraska. She passed away on Monday, April 15, 2013 at the Hearthstone Nursing Home in York, at the age of 90 years and 1 month. She was one of six children in the Kraft family. Joyce was raised near Louisville and attended College Hill country school and graduated from Louisville High School in 1941. She attended Commercial Extension Business School in Omaha. She was employed at Glenwood State School in Glenwood Iowa and later at Layne Western Company in Omaha. While working at Layne Western she met her future husband, Lawrence W. Wattles. They were married October 20, 1946. The couple moved to Auburn, Nebraska where their two children, Terry Lee, and Dee Renee, were born. The family moved to Geneva in 1958. Joyce later served as Fillmore County Deputy Assessor for ten years and as secretary for the Soil Conservation Service, now the Natural Resource District, for 24 years. She retired from that position in 1996. Joyce was a charter and faithful member of Prince of Peace Lutheran Church. She was a member of Kensington Club. Joyce was preceded in death by her husband, Lawrence, daughter Dee, parents, one brother, LaMarr Kraft, and one sister Carol Olson. She is survived by one son, Terry, and wife Rebecca of Hayden, Colorado, sisters Shirley McCormack, Denton, Texas; Phyllis Kozak, Grand Rapids, Michigan; brother Bryce Kraft, Colville, Washington; Son-in-law, Dan Yost of Hastings, NE; 3 grandsons and spouses, Kyle Yost and wife, Kari; Kipp Yost and wife, Mindy; Ryan Wattles and wife, Rachel; one granddaughter LeAnn (Wattles) Mastera and husband Marty; five great-grandsons Peyton, Carson, Brady and Nolan Yost; Asher Mastera and three great-granddaughters Sydney and Lucille Wattles and Camble Mastera; and many nieces and nephews. Funeral services for Joyce will be held on Saturday, April 20, 2013 at 10:00 a.m. at the Prince of Peace Lutheran Church. Pastor Del Klover & Pastor James Sells will be officiating the service. There will be no public visitation. Graveside services will follow the funeral at the Geneva Public Cemetery. Memorials in lieu of flower to the Prince of Peace Lutheran Church.

Joyce Arvene (Kraft) Wattles was born to Albert M. and Olga (Nitz) Kraft, March 15, 1923, on a farm near Louisville (Cass County), Nebraska. She passed away on Monday, April 15, 2013 at the Hearthstone Nursing Home in York, at the age of 90... View Obituary & Service Information

The family of Joyce A. Wattles created this Life Tributes page to make it easy to share your memories.

Send flowers to the Wattles family.