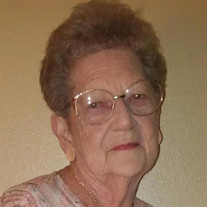 A Funeral Service for Juanita will be held on Thursday, December 28, 2017 at 10:30 a.m. at Farmer & Son Funeral Home with Kim Dunker officiating. Visitation will be held on Wednesday, December 27, 2017 from 1:00 p.m until 8:00 p.m. with the family present from 6:00 p.m. until 8:00 p.m. at Farmer & Son Funeral Home in Geneva. Graveside Services will be conducted at the Geneva Public Cemetery following the funeral service. Memorials are to be directed to the family for a later designation. Nellie Juanita Evans Ward was born at the family home in Rollin, Kansas to Thomas Lee Evans and Edith Crowl Evans on November 14, 1929. She was one of five children. Juanita passed away on December 22, 2017, in Lincoln, Nebraska at the age of 88. As a young girl, Juanita worked in an overall factory in Chanute, Kansas. While working in Chanute, she met Wayne. On March 28, 1954, Juanita married Wayne Franklin Ward at her parent’s home in Rollin, Kansas. To this union two sons were born: Jerry in 1955 and Dan in 1957. While living in Kansas, Juanita owned a Mode O’ Day store for a number of years. She also ran an ice cream shop in Madison, Kansas. In 1970, Wayne and Juanita moved to Geneva, Nebraska after Wayne accepted a job at the A. Kohler Co. Juanita took a job at the Wheelers store in Geneva and worked there for 12 ½ years. She then took a job at YRTC working the night shift in a cottage. She worked there for 20 years before retiring in 2006. Juanita and Wayne loved to travel. They went to Hawaii and many places in the U.S. They especially enjoyed their trips to Las Vegas, the “Boats” in Council Bluffs, and family reunions in when she was surrounded by her kids, grandchildren, and great-grandchildren. Preceding her in death was her loving husband, Wayne, her mother and father, Thomas and Edith Evans, her brothers, Albert, Roy Lee, and Dean Evans, and her beloved granddaughter, Laura Osborne. To mourn her passing, are her sons: Jerry and wife, Pam; Dan and wife, Peg, of Geneva; Grandchildren: Mark Ward and wife, Kelly of Tryon, Alanna and husband, Ron Kramer, of Seward, Cameron Ward and Jenna Smidt of Hastings, Ten great-grandchildren: Tyson, Karlie, Tagert, Kandace, Mason, Klaire, Madison, Carson, Jaxon and Lilly, and one great-great granddaughter, Roselynne, one brother, Eugene Evans. As well as many extended family and friends. There were 3-recorded songs during the service and they were; “Take My Hand”, “In The Garden” and “I Want To Stroll Over Heaven With You”. Pallbearers included Mark Ward, Cameron Ward, Tyson Osborne, Ron Kramer, Mike Evans, Dick Sieber, Mason Ward and Tagert Osborne.

The family of Juanita Ward created this Life Tributes page to make it easy to share your memories.

A Funeral Service for Juanita will be held on Thursday, December...