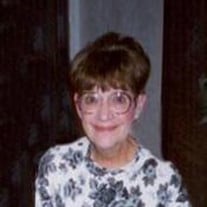 Judith Ann (Schupbach) Stewart was born April 19, 1933 to Raymond Lee Schupbach and Dorothy Mae Rayls in Geneva and passed away on January 7, 2013, at her home in Geneva at the age of 79.Judy worked at the local supermarket in Geneva in the meat department. She later fulfilled her dreams in the field of fashion becoming a right hand gal for Marguerite Freeman at “Marguerite’s Dress Shop” in Geneva. She was a buyer of the clothing and would assist many of the local Geneva customers in purchasing just the right out fit to wear. She would always be honest and tell you if the item you put on didn’t look quite right and she would do everything in her power to find something else in the store that would look just right on you. Over the holidays or for birthdays, men and children would go to see Judy because she would be able to help them pick out just the right clothes for their family member, and of course, she knew their size by heart.Later Marguerite’s became Kay-Marie’s Dress Shop where Judy continued her desire as a fashion stylist and clothing buyer with her dear friends, Pamela “Kay” Turner and Rose “Marie” Thurin.Judy attended Geneva High School and later moved to Corvallis, Oregon where she completed schooling.After returning back to Geneva from Oregon, Judy met her dream man at a carnival as he whisked her away from another gentleman. He said let’s go to the dance and they were off. After courtship, on December 29, 1949, Judy and Harold V. Stewart, Jr. “J.R.” were united in marriage. To this union was born one son, Bradford Scott and one daughter, Mary Katherine.Judy was a member of the International Order of the Rainbow for Girls when she lived in Corvallis Oregon and was a Worthy Advisor for her Assembly. Judy also taught Sunday School in her earlier years at the First Congregational United Church of Christ in Geneva. Judy was also a member of the Women’s Fellowship.Judy was a kind and loving woman to all that met her, but she was most proud of her 5 grandchildren and great grandchildren who she adored and they range in age from 30 to 1, Dustin, Alyssa, Dylan, Kaitlynn, Courtney, Harper, Haven, Harlow, and Hadlee. Their own unique personalities reflect the influence and impact she had on each one. Time spent visiting with family and friends was a source of great joy and her home was always filled with laughter and love.Not only did she touch the lives of her family, she was a great influence upon many other people from different walks of life.Judy is preceded in death by her parents, Raymond and Dorothy Schupbach, and her sister, Delores Tesar. She is survived by her husband, Harold V. Stewart, Jr. of Geneva; her son, Bradford Stewart and wife Sandy of Doniphan; her daughter, Mary Bradley and husband, Jonathan, of Waterloo, Nebraska; her grandchildren Dustin and Amanda Stewart of Doniphan, Nebraska; Alyssa and Justin Leu of Aurora, Nebraska; Dylan Stewart of Doniphan, Nebraska; Kaitlynn Bradley and Jonathan Villavicencio of Treynor, Iowa; Courtney Bradley of Waterloo, Nebraska; her brother-in-law Jerry “Jake” Tesar of Lincoln, Nebraska; brother-in-law and sister- in- law, Robert and Mary Lou Kuhlman of Fort Collins, Colorado, and other close relatives and a multitude of friends. Judy was a woman of inner strength. Her strong faith and trust in God saw her and all of her family through bad times, but also reinforced her appreciation for the many joys that she experienced in this life.Memorial service for Judy will be Thursday, January 10, 2013 at 2:00 p.m. at the First Congregational United Church of Christ in Geneva, Nebraska. Cremation no visitation. Memorials are directed to the Tabitha Hospice. Private family committal of ashes will take place in the Geneva Public Cemetery at a later date.

Judith Ann (Schupbach) Stewart was born April 19, 1933 to Raymond Lee Schupbach and Dorothy Mae Rayls in Geneva and passed away on January 7, 2013, at her home in Geneva at the age of 79.Judy worked at the local supermarket in Geneva in the... View Obituary & Service Information

The family of Judith A. Stewart created this Life Tributes page to make it easy to share your memories.

Send flowers to the Stewart family.