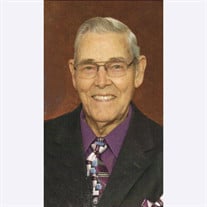 Funeral services for Junior will be held on Saturday, October 11, 2014 at 10:30 a.m. at the Trinity Lutheran Church in Bruning. Pastor Stuart Sell will be officiating the services. Military graveside services will follow the funeral in Trinity Lutheran Cemetery. Military rites will be performed by the Bruning American Legion Post 166. Visitation will be held on Friday from 1:00 p.m. to 8:00 p.m. at the Farmer & Son Funeral Home in Geneva. Memorials are directed to Aseracare Hospice or Bruning American Legion Post 166. Julius Martin Lentfer Jr., 87, after living a full and productive life, was called to meet his Lord and Savior on October 8, 2014. He passed peacefully at home with his wife Lillian at his side after a long battle with cancer. Julius, who went by Junior, was born on the family farm, 4 miles southwest of Strang, Nebraska on February 9th, 1927 to Julius John Bernhardt Lentfer and Sophie Alice Steenbock Lentfer. He was the eighth child born into a close knit farming family of 12. He was baptized at the United Brethren Church in Strang on May 27, 1928, by Rev. Dr. G.E. Mason and was confirmed April 10, 1949, at Trinity Lutheran Church, Bruning, Nebraska by Pastor J. B. Cronek. He attended elementary school at Rural Bluff Dist. 56 and graduated from Strang High School in 1944. Growing up he loved to play cards with his “Ma and Pa” and his brothers and sisters. He always looked forward to a new pair of overalls before each school year! After high school graduation he helped his “Pa” farm until he was drafted into the Army on June 14, 1945. He was inducted at Fort Leavenworth, Kansas and did his basic training at Camp Roberts, San Luis Obispo, California. While there, he earned an Expert Marksman Badge with the M-1 rifle. He was then sent to Marburg Germany, as Sargent of the 3rd Replace- ment Depot, where he processed incoming and outgoing soldiers. He was discharged on November 28, 1946. Junior married Lillian May Gerdes on March 20, 1949. They lived several miles north of Bruning until moving to the Gerdes farm southeast of town in 1961. They farmed and raised their family there until 1986, when they moved into Bruning. His joy came from his faith, his family and farming. Family meant everything to him. He rarely missed a sporting event, recital, concert, performance, or reunion. He was a humble man who took quiet satisfaction in seeing “clean fields and straight rows”. Junior and Lillian were devoted soul mates, enjoying 65 years of marriage. To this union were born four children, John, Alan, Audrey and Scott. Junior would get a twinkle in his eye and with a big smile say, “We have 3 Jacks and a Queen!” He loved his community and was active in many organizations. He was the Commander of Durham Mammen Post 166 for 7 years of which he was a lifetime member. He was a councilman of Trinity Lutheran Church in Bruning for 13 years and also sang in the choir, ushered and was on the church building committee. He served on the Bruning School Board for 13 years, was a lifetime member of both the V.F.W. and President of the Harmony Cemetery Association for 30 years. Junior was a substitute Rural Postal Carrier for 5 years and drove the Bruning school bus. After retiring from farming, he worked 12 years as a welder for Feedlot Fencing. Having more free time, he and Lillian enjoyed evenings dancing the night away to a polka or waltz, along with square dancing and round dancing. He became a collector of toy tractors and has over 200 in his collection. He loved Cornhusker Football and was an avid baseball fan, who through the years had learned to endure long suffering, but never gave up HOPE, for his beloved Chicago Cubs. He also was a woodworker and enjoyed making and playing board games. He was selected along with 250 other World War II veterans of Nebraska to go on an Honor Flight to Washington, D.C. to visit the WWII Memorial in 2008. It truly was a highlight in his life to be able to participate in this. Junior and his wife Lillian enjoyed traveling for the past 13 years and wintered in “The Valley” in Harlingen and Weslaco, Texas, with new and dear friends from all over the United States and Canada. Junior will always be remembered as a loving husband, father, grandfather and great-grandfather who had an infectious smile and laugh and was a man of integrity and fairness. Julius was preceded in death by his parents, Julius and Sophie, five brothers; George, Henry, Ervin, Ernest, Edwin Lentfer, and 3 sisters; Alice Mendoza, Alberta Hulse, and Wilma Getz. He is survived by his wife Lillian, children; John (Patt) Lentfer of Geneva, Alan (Deb) Lentfer of Thornton, CO, Audrey (Randy) Shaneyfelt of Loch Lloyd, MO, and Scott (Marlene) Lentfer of Kearney, nine grandchildren; Jennifer, Jacob (Chelsea), and Preston Lentfer, Jessina and John (Megan) Lentfer, Ashley, and Drew (Sirena) Shaneyfelt, and Austin (Kynzie) and Rachel Lentfer, two step-grandchildren; Tim Tobin and Tracey (Tobin) Swanson. He is also survived by four great grandchildren; Easton and Eli Lentfer, Dash Lentfer and Charlotte May Shaneyfelt.Other survivors include his brothers Lawrence Lentfer and Raymond Lentfer and one sister, LuEtta Strothkamp all of Geneva, Nebraska.

Funeral services for Junior will be held on Saturday, October 11, 2014 at 10:30 a.m. at the Trinity Lutheran Church in Bruning. Pastor Stuart Sell will be officiating the services. Military graveside services will follow the funeral in Trinity... View Obituary & Service Information

The family of Julius M. "Junior" Lentfer Jr. created this Life Tributes page to make it easy to share your memories.

Funeral services for Junior will be held on Saturday, October...

Send flowers to the Lentfer family.