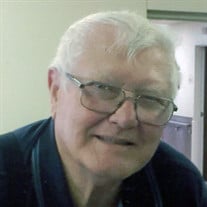 A Funeral Service for Randy was held on Friday, December 6, 2019, at 10:00 a.m., at Farmer & Son Funeral Home in Geneva, Nebraska with Kim Dunker presiding. There were 4 songs for Randy’s funeral service. Guitarist, Ron Fleecs, accompanied vocalist, Becky Elznic, as they played and sang, “My Way” and “Amazing Grace”. There were also 2-recorded songs, “He Walks With Me” by Merle Haggard and “On The Road Again” by Willie Nelson. Pallbearers included Mike Jurgens, Steve Jurgens, Lonnie Stetina, Stan Tatro, Gene Miller and Morley Most. Honorary Pallbearers were Norman “Hoot” Tesar, John Boitnott, Larry Johnson, Ron Kapperman and Frankie Turek III. Graveside Services were held following the funeral service at the Bruning Public Cemetery in Bruning, Nebraska. Memorials were directed to the family to be designated at a later date. Farmer & Son Funeral Home was in charge of funeral arrangements. Karnath Randall (Randy) Haak was born at home in Bruning, Nebraska to John (Jack) and Carrie (Jurgens) Haak on March 4, 1944. He passed away peacefully on December 1, 2019 in Ohiowa, Nebraska at the age of 75 years, 8 months, and 28 days. He was the youngest and only boy in the family of five children. He attended grades K-10 in Geneva, Nebraska. While attending school, he worked for Chaney Brothers and later for the A. Koehler Company. He then moved to York, Nebraska where he worked for an egg breaking company and also won some money at the County Fair in the boxing ring. In 1962, he and friend, Richard (Dick) Petersen, went to California where he worked at various jobs including Griffith Laboratories and Pancho’s restaurant kitchen equipment installing new equipment. While in California, Randy and his cousin, Tim Theodoroff, spent weekends at Lions Drag Strip where he won several races. He also spent a lot of time surfing whenever possible. During his stay in California, he also met and married Nancy Boaz on March 9, 1968. They returned to Nancy’s hometown of Fort Worth, Texas where they became the parents of Annette Henderson, Shelly Haak, Nicki Haak and Greg Haak. While living in Texas, he continued to install Pancho’s kitchen equipment, set telephone poles and also worked numerous other jobs. Randy continued competing in drag racing at the Kennedale Racetrack in Texas. In the mid 70’s, Randy returned to Geneva. While living in Geneva, he competed in numerous car races at Thayer County Speedway in Deshler and at Eagle Raceway in Eagle, winning most races and taking on anyone who would challenge him in the 70’s. Randy was very passionate about his racing cars. He did all the mechanics on them as a one-man pit crew, and due to some misfortune some cars were not repairable even by Randy. In 1984, he returned to Geneva to be closer to his parents due to their failing health. He took up work for Andrews Electric, Sargent Irrigation and Tom Biegert, laying brick for the new streets in Geneva. He also painted water towers in numerous towns. Later, he worked for L.J. Webb Construction. He moved to Auburn, Nebraska in the late eighties, where he continued to work for L.J. Webb for the next 15 years. After quitting L.J. Webb, he worked for Freddie Allen, a farmer, which he thoroughly enjoyed. It was here that he met his friends Sonny, Howard and Francis. In 2001, he moved back to Fort Worth to be close to his daughters. He bought an office cleaning business called CleanNet USA, cleaning banks and other businesses. Due to his failing eyesight, he returned to Auburn in November 2003 and then moved to Geneva in the spring of 2004 where he lived with his longtime friend, Sharon Elznic, on the farm. Randy’s hobbies included his love of fishing, bowling, traveling to New York City to see Niagara Falls, South Dakota to see Mount Rushmore, Montana, Yellow Stone to see Old Faithful, to Las Vegas to visit his old friend, Tom Hiatt, racing cars, including his 1964 Blue Oldsmobile and 1980 Camaro, and successfully playing in pool tournaments. He never turned down a good card game with friends. He was an excellent mechanic and worked on many of his own vehicles. He was known to have had a few accidents but quickly got his vehicles back on the road so he could return to work. After moving to back to Geneva, he made new friends in Ohiowa. He and Sharon then joined the senior card party. He recently started playing Texas Hold’Em in Shickley with friends and his nephew, Lonnie. While spending time with his nephew Lonnie, they would make trips to casinos. He also loved to watch sports including NASCAR, and he rooted for Car #88,. He also enjoyed watching cage fighting, boxing, Dallas Cowboy’s football, Husker football, David In The Kitchen on QVC and Larry’s Country Diner. P.S., You were not allowed to call or talk when he was watching Jeopardy. Randy was preceded in death by his parents Jack and Carrie Haak; his sisters Adrienne Haak, Gwenith (Gwen) Stetina, Marlyce (Marcy) Robling, Jacae Sanders; and son Gregory (Greg) Haak. He is survived by his close friend Sharon Elznic of Geneva; daughters Annette Henderson, Shelly Haak of Fort Worth, Texas and Nicki Haak of Leander, Texas; 5 grandchildren and 10 Great Grandchildren: Ashley and husband Colin Ashton and daughter Allie Ashton, Kristan Saville and sons Blaine, Christopher and Kameron, Stephanie Allen and daughters Janiyah and Janelle and Natasha Allen and daughters Brayleigh and Everleigh, Alexis Hall and son Michael and daughter Kayla; brother-in-law Bob Sanders of Geneva, Nebraska; nieces Karen Ward, Brenda Terrell, Becky Robling , Barbara Radloff, Debbie Carbonneau and Cheryl Price; nephews Lonnie Stetina, Terry Bahe, Robbie Sanders and Bryan Robling; and many cousins, friends and his favorite cat Little Bit.

The family of Karnath R. "Randy" Haak created this Life Tributes page to make it easy to share your memories.

Send flowers to the Haak family.