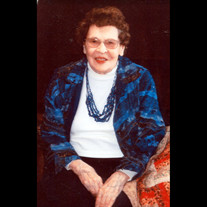 Kathryn Margaret Sloan Ashby was born to Charles Porter (Port) and Lillian Josephine Stiefer Sloan in Geneva, Nebraska on February 3, 1924 and passed away at Bryan Memorial Hospital in Lincoln, Nebraska on July 10, 2017 at the age of 93 years,... View Obituary & Service Information

The family of Kathryn Sloan Ashby created this Life Tributes page to make it easy to share your memories.

Send flowers to the Ashby family.