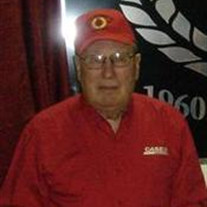 Funeral services will be held Thursday, January 23, 2014 at 10 a.m., at the United Methodist Church in Geneva. Visitation from 3 p.m. until 8 p.m., on Wednesday, at the Farmer & Son Funeral Home in Geneva. Interment in the Geneva Public Cemetery. Memorials to Fillmore Central FFA Chapter, Fillmore County Hospital and United Methodist Church in leu of flowers. Keith Remy Burt, (85), passed away peacefully on January 18, 2014. He wished for all four of his children to be present, passing within 15 minutes of the arrival of the fourth child. He was born on June 30, 1928, to Harriet (Remy) and John Burt. Keith, the youngest of three surviving children, grew up on the family homestead south of Grafton, NE. He attended grade school in Grafton, riding his pony, Dan, to school. Keith graduated from Geneva High School in 1945 where he lettered in basketball. After graduation Keith continued to farm with his father and started to branch out into additional agricultural enterprises such as custom hay bailing and combining. On December 4, 1949, Keith married Marjorie Lucille Lovegrove. Marjorie grew up on a farm two and a half miles from the Burt farm. Keith and Marjorie began their life together outside of Harvard, Nebraska, where Keith farmed the air base and they started their family. Keith started Corn-O-Rama on the Harvard Air Base. In 1959, Keith, Marjorie and the family moved to the Burt homestead south of Grafton. At the same time Keith purchased a farm implement business in Geneva beginning a 53-year career as an International Harvester/Case-IH dealer. Keith earned his designation as an “XL Dealer” in the 1980’s; a designation reserved for those dealerships that met the highest standards. Keith passed the operations of the dealership on to his daughter Janet in his latter years. Keith and Marjorie enjoyed travel and were fortunate to see many parts of the United States and several European countries. Hawaii was a favorite designation. They celebrated their 62nd anniversary shortly before Marjorie’s death in 2011. Keith was a member of the Geneva United Methodist Church. He had a passion for farming, being involved in many aspects of farming and ranching and continuing to expand his holdings in farmland. Keith had a good memory for numbers often quoting the price he paid for land or a piece of equipment, the yield for a particular year and the price of corn, wheat and beans. Keith was a devoted husband and father. He is survived by his four children and two grandchildren; daughter and son-in-law, Linda Burt and John Rebrovic, Omaha, NE; daughter and son-in-law Beverly and Clark Epke, Lincoln, NE; son, John K Burt, Geneva, NE; daughter and son-in-law Janet and Kim Eggers, Superior, NE; and two grand children Effie Epke Nestrud, Dedham, MA and Bryan Eggers, Lincoln, NE. Also surviving Keith are his sisters Maxine Glaskin, Colorado Springs, CO; and Ardith Jean Reese, Pineville, NC. In addition to his parents and wife, one sister, Shirley Burt and a grandson, Zak Epke, preceded him in death.

Funeral services will be held Thursday, January 23, 2014 at 10 a.m., at the United Methodist Church in Geneva. Visitation from 3 p.m. until 8 p.m., on Wednesday, at the Farmer & Son Funeral Home in Geneva. Interment in the Geneva Public Cemetery.... View Obituary & Service Information

The family of Keith R. Burt created this Life Tributes page to make it easy to share your memories.

Send flowers to the Burt family.