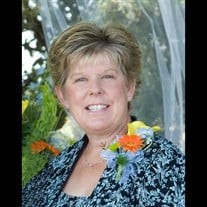 Kelly Sue Dowdy passed away on March 28, 2017 after a courageous battle with brain cancer. She was born in Hastings, NE on March 1, 1960 to Larry and Janis Hinrichs. She was the second of four children. She grew up on a farm near Glenvil where she learned to enjoy the outdoors. Kelly was a member of the 1977 Sandy Creek State Volleyball Championship team. She graduated from Sandy Creek High School in 1978. It was during high school that Kelly met her soul-mate and her true love, Doug Dowdy. Doug and Kelly were married on August 25, 1979. They moved to a farm near Carleton, NE and were blessed with three wonderful children, Jordan, Justin, and Jessica. Kelly adored both her husband and her children. She always put the needs of Doug and her children ahead of her own. Kelly was a wonderful stay-at-home mom and farm wife. She was actively involved in her children’s activities and interests and attended nearly every event in which her children participated. She took care of all the little things in life that usually go unnoticed. She also was active with her church, Bethel Church of the Brethren, and her children’s schools, Carleton Public School and Shickley Public School. Kelly was always busy whether it was spending time with her family and friends, working outside in her yard and garden, cleaning houses, and making homemade bread or runzas for her family and friends. Her life was guided by her faith in Jesus Christ. She faithfully served the Lord through her good works of caring for others. Kelly also refereed volleyball for almost thirty years and was a member of the Shickley Community Foundation. Doug and Kelly enjoyed watching and attending many high school and college sporting events including many Husker volleyball games. She loved the times with her close friends visiting about kids, grandkids and life. Kelly loved her five grandchildren, Madelynne (6), Jackson (5), Samuel (4), Jamie (2), and Garrett (1) and they all adored her. She enjoyed visiting, playing, and spoiling them. She was a very big part of their lives, and touched each one deeply. Kelly will be deeply missed by her family and friends. She was always out-going, hard-working, caring, and loving. She had a smile and laugh that was always contagious. Kelly was preceded in death by her father, Larry Hinrichs. Kelly is survived by her husband of 37 years, Doug; her children, Jordan Dowdy and his wife April and their children, Madelynne and Samuel, of Lincoln, NE, Justin Dowdy and his wife Jillian and their children Jackson and Jamie, of Gothenburg, NE, and Jessica Schoenholz and her husband Alex and their child Garrett of Bruning, NE. Kelly is also survived by her mother, Janis Hinrichs, of Glenvil, NE; her sister Kathy Murman and her husband Dave of Glenvil, NE; brothers Kurt Hinrichs and his wife Jolene of Hastings, NE, and Kipp Hinrichs and his wife Tonya of Glenvil, NE; father-in-law and mother-in-law Max and Marj Dowdy of Shickley, Nebraska; and brother-in-law and sister-in-law Stan and Andrea Dowdy of Denver, Colorado. A funeral service for Kelly was held on Saturday, April 1, 2017 at 10:30 a.m. at the Bethel Church of the Brethren, rural Carleton, Nebraska. Pastor Mike Row officiated the service. Sara Ahrens played the prelude and postlude and accompanied the congregation in the singing of “Amazing Grace.” The recorded selections “There Will Be A Day” and “Save A Place For Me” were also played during the service. Pallbearers for the service included Dean Zauha, Marlin Slingsby, Doug Schardt, Steve Kamler, Reg Sissel, Steve Dornbierer, and Jerry Wiedel. Interment was held in the Bethel Cemetery following the funeral service. Farmer & Son Funeral Home conducted the services. Online condolences may be left at www.farmerandsonfuneralhome.com. Memorials are suggested to the family for future designation.

Kelly Sue Dowdy passed away on March 28, 2017 after a courageous battle with brain cancer. She was born in Hastings, NE on March 1, 1960 to Larry and Janis Hinrichs. She was the second of four children. She grew up on a farm near Glenvil... View Obituary & Service Information

The family of Kelly S. Dowdy created this Life Tributes page to make it easy to share your memories.