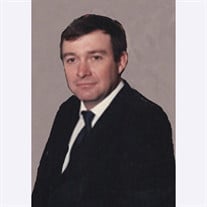 Memorial services for Ken will be 10:30 a.m. Friday, November 21, 2014, at the St. Mary's Catholic Church in Shickley, Nebraska. It was Kenny's wish to be cremated. Memorials are directed to the family for later designation or to Caring Bridge, CaringBridge - www.caringbridge.org Donation Processing Center PO Box 6032 Albert Lea, MN 56007-6632 After a long battle with cancer, Kenneth Bedlan passed away at his home on November 14, 2014 at the age of 65 years, 1 month, and 17 days. Kenneth John was born Sept. 28, 1949 in Hebron, Nebraska to Leo and Margaret (Marge) Bedlan. He was one of four boys born to Leo and Marge. Kenny grew up on a farm near Ohiowa, moving to Shickley in 1960. He attended Shickley Public School, graduating in 1967. Shortly after graduating, Kenny enlisted in the army. He was deployed to Vietnam, serving a year there. After his enlistment was up, Kenny returned home to Shickley, working at Biegert Feeds. He met and married Karen Draper on August 8, 1975. A son, Ryan John was born June 9, 1977. Ryan was Kenny's happiness. The two of them spent many hours throwing a football, shooting hoops, hunting or golfing. Through out Ryan's school years and college years, Kenny was always right there, cheering Ryan on. Kenny also enjoyed golfing with Ryan. Shortly after Kenny was diagnosed with cancer, Ryan arranged a golfing weekend for him and his dad at ''The Prairie Club", a semi-pro golf course near Valentine, NE. One of Kenny's bucket list items was also to see George Strait in concert. That wish was fulfilled when Kenny and Karen attended his concert at the Century Link in Omaha. Kenny's comment after the concert was "Now I can die happy!" Kenny worked for Biegert Feeds in Shickley. He then worked with his brother Gene in construction for five years. In 1981, Kenny bought the bar and grill in town and ran it for 15 years. Soon after selling the bar, Kenny bought a truck and trailer and hauled grain until 2007. Karen retired from teaching in 2007 and Kenny and Karen moved to Omaha to be closer to the grandkids. Kenny enjoyed being with the grandkids. One of Kenny's favorite places to take the grandkids was to Henry Doorly Zoo. Kenny was preceded in death by his parents, Leo and Marge Bedlan and father-in-law Bill Draper. He is survived by his wife, Karen, son and daughter-in-law, Ryan and Heidi, grandchildren Bella and Harry Tarr, Jensen and Chloe Bedlan, brother Gene of Shickley, brother Bob and sister-in-law Marge of Shickley, brother Jim and sister-in-law Linda of Reno, Nevada, mother-in-law Donna Draper of Gretna, and several nephews and nieces.

Memorial services for Ken will be 10:30 a.m. Friday, November 21, 2014, at the St. Mary's Catholic Church in Shickley, Nebraska. It was Kenny's wish to be cremated. Memorials are directed to the family for later designation or to Caring... View Obituary & Service Information

The family of Kenneth J. Bedlan created this Life Tributes page to make it easy to share your memories.

Send flowers to the Bedlan family.